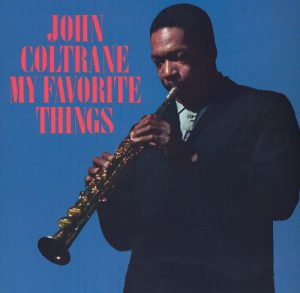 As the patron saint of rock ‘n’ rollers who dabble in jazz, John Coltrane carries a lot of spiritual weight on his long-dead shoulders.

I’d always been intrigued by Roger McGuinn invoking him as an influence on the almighty “Eight Miles High,” but it wasn’t until KFSR that I truly discovered his music.

As some of you might remember, in the early days KFSR started its broadcasting weekdays 6:00AM (or so, because college students) with six hours of J-A-Z-Z jazz, followed by afternoons and evenings of alt-rock. The practical upshot of this was that it was my first firehose exposure to jazz of all shapes and sizes.

And while I heard a lot of jazz (and taking a “History of Jazz” class at CSUF definitely helped me understand context) (and not just me, as Johnny Heathen, KFSR’s hardcore DJ, once asked the professor if bebop was the punk rock of jazz) from Jelly Roll Morton to Spyro Gyra, what stuck out the most for me were the infinite spaces between each one of Mile Davis’ trumpet blasts and the curlicue pattern of John Coltrane’s sax.

I realize, of course, that this isn’t any kind of original thinking: nobody is going to tell me “wow! how cool and brave you are to enjoy Miles Davis and John Coltrane!” But whatever, I’m never going go full in on jazz at this point anyways.

In any event, I really loved John Coltrane’s take on Rogers and Hammerstein’s instant standard (via Julie Andrews) “My Favorite Things,” living for the moment where Coltrane suddenly went 90 degrees from the lovely melody he’d been skirting around.

There’s also a pretty rad piano solo from McCoy Tyner (which, duh), and the whole thing is held together by incomparable drummer Elvin Jones. In terms of great cover interpretations, Coltrane’s “My Favorite Things” ranks right up there with Jimi Hendrix’s “All Along The Watchtower” or Hüsker Dü’s psychedelic shred version of (ahem) “Eight Miles High.”

Oh, and you should check out this absolutely fire live version:

“My Favorite Things” performed live in Belgium in 1965