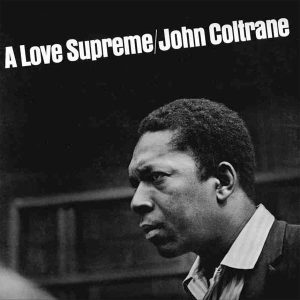 A Love Supreme, of course, is probably one of the two or three best-loved jazz albums of all time.

Recorded in a single blast in December of 1964 and released a scant month later, it’s one of the very few not just records, but works of art that pretty much everybody agrees is completely and utterly transcendent.

“Acknowledgement,” the opening track of A Love Supreme, is based upon a simple four-note motif that had been floating around the universe since the dawn of time. It’s first captured and channeled by bassist Jimmy Garrison, while pianist McCoy Tyner hints at it without hitting it. When John Coltrane comes in, he totally ignores it until he can’t, finally landing upon it and then typically plays with, around and through it.

And, of course, “Acknowledgement” reaches its peak when Coltrane puts down the sax and just flat out sings it:

And here’s the thing, he can’t really sing. And normally I would say that’s not the point, but in this case it really is the point. The beauty of John Coltrane’s overdubbed singing is the humanity, the sense of him being so overwhelmed by and about what he wanted to express, he put down the instrument into which he could pour all of his formidable talent as not expressive enough.

Only his voice could express what he wanted to express. It’s one of the most nakedly human moments ever recorded, and probably a major reason that A Love Supreme has resonated down through the decades to the point where there has been a long-running Saint John Coltrane Church.