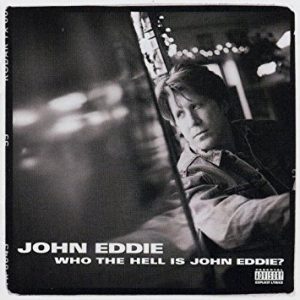 Luckily, John Eddie knew the question you were going to ask when you saw this post, and named his album after it.

As it turns out, Who The Hell is John Eddie? is still the only music I’ve ever heard from Eddie, who is basically a straightforward heartland rocker based out of New Jersey. And I’m not going to lie: I had just turned 40 when I got this album, and the opening verse of “Forty” was completely relatable.

Over a ringing 12-string guitar, Eddie sings for an entire cohort of Gen-Xer males:

“Forty” is the first Certain Song I’ve written about in the very small “Songs About Winona Ryder” category, which might include The Miss Alans and will definitely include Matthew Sweet.

As the song rolls on, Eddie details some of ignominies of becoming middle-aged — getting the senior discount at the theatre, and wasting his life playing in a band, before realizing that he’s still not as old as some.

And of course, 2003 was a long time ago — I’m now at the age that Bruce was when Eddie wrote this song, but it’s still fun and somewhat relatable. And the good news is that even the Stones are still out there, doing their thing.