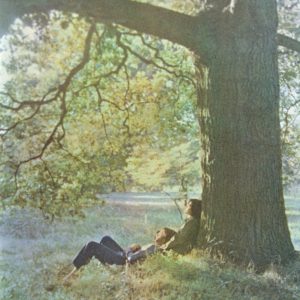 Otherwise, why use Ringo Starr as the drummer and Klaus Voormann — who Lennon met during the Germany days and who designed the cover of Revolver — as the bassist. As John Lennon, he had his pick of musicians, but using Beatles-associated musicians (including an actual Beatle) was a way to acknowledge that he knew that we knew that he was always going to be one, no matter what he believed.

And what he believed was this:

In 1970, even after a whole album informed by honesty and pain, and even sun over a gorgeous echoing piano and a sparse, slow rhythm, those words rang out as a shock. After all, only a few years previous, he was forced to apologize for saying that the Beatles were “bigger than Jesus,” cos crazy-ass Christians were using it as a pretense to burn Beatles records.

(In Mark Shipper’s amazing fake Beatles biography, Paperback Writer, instead of apologizing, Lennon said that what he really meant was that The Beatles were taller than Jesus, and because nobody could prove otherwise, everybody accepted that.)

But that was just the first part of what Lennon had to say. In the song’s amazing second part, Lennon lists all of the other sacred things in which he doesn’t believe, as Phil Spector’s understated production (perhaps the only time in history that phrase would ever apply) slowly ratchets up the intensity without increasing either the speed or volume.

And as he spits out “Beatles,” the music just stops dead. As if that’s the ultimate heresy. More so that religious figures, spiritual practices, politicians or even other musicians. I mean, if John Fucking Lennon doesn’t believe in The Beatles, what could he possibly believe in?

“I just believe in me.” Oh. And with the music sliding back in, he adds: “Yoko and me.” Right. Of course. And then quietly and sadly, in his speaking voice, “that’s reality.”

At around the same time that John Lennon/Plastic Ono Band came out, John Lennon gave the famous “Lennon Remembers” interview to Jann Wenner for Rolling Stone, and it serves in a huge way as extended liner notes for the whole album, but also for the lyrics of this song.

This is not just John Lennon slamming the door shut on the Beatles break-up, it’s also him giving fans permission to mourn the break-up: he understands their pain, because it’s his pain as well.

I mean, after all, after first establishing that the shelf life of a pop act wasn’t a short fixed number, it must have seemed that they could go on forever, especially when you consider that the albums they released prior to their break-up were Revolver, Sgt Pepper’s Lonely Hearts Club Band, Magical Mystery Tour, The Beatles and Abbey Road.

So no matter what it might have felt like to The Beatles, with the secret shame of the aborted “Get Back” project, their fans must have felt like there was no ending in sight. You know, like The Rolling Stones, who had powered through the death of their founder with their best album to date.

And yeah, so while the dream was over, what John Lennon didn’t know — couldn’t know, really — was that there a new dream beginning: the dream of The Beatles near-perfect near decade of music, forever to be discovered and examined and discussed and, most importantly of all, loved.