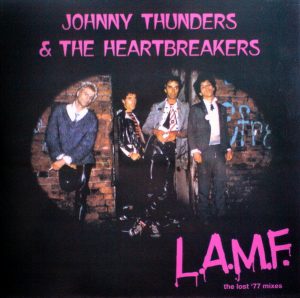 Legendarily written by Dee Dee Ramone with an assist from Richard Hell — who was in an early incarnation of the Heartbreakers (because New York City law insisted that Richard Hell have direct connections with every legendary punk band) — about Jerry Nolan, the harrowing “Chinese Rocks” is the most heroin song that ever heroined that wasn’t actually called “Heroin.”

I, of course, first heard this on the Ramones End of The Century, with the tempo upped and the guitar overdubs Spectored, but as much as I always loved it, when I finally heard the Heartbreakers version, it made much more sense.

Because while Joey Ramone was a much better singer than Johnny Thunders, he didn’t have the — ahem — personal experience with the subject that made the words cut like a razor blade.

Somebody called me on the phone
They said, “Hey, is Dee Dee home?
Do you wanna take a walk? You wanna go cop?
You wanna go get some Chinese rocks?”

It must have been weird for Jerry Nolan to do a thundering drum roll throughout the chorus of a song that was basically about his drug addiction knowing that everybody would assume it was about Thunders. Either way, it just made the second verse that much more fucked up:

The plaster’s falling off the wall
My girlfriend’s crying in the shower stall
It’s hot as a bitch, I shoulda been rich
Now, I’m just digging a Chinese ditch

You can practically smell the squalor, the desperation, the hopelessness of the situation they’ve put themselves in.

That’s why its so insidious that the tone of “Chinese Rocks” is so fucking defiant. If “Born to Lose” was all about accepting fate, then “Chinese Rocks” is about celebrating addiction, right down to the whoops of joy “ooh, ah, ooh, ah” that simulate the rush of one more great cop, yet another time staving off either overdose or withdrawal.