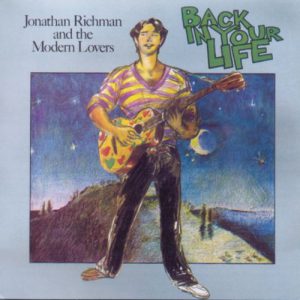 Really, this is about the version of “Affection” that Jonathan Richman and the Modern Lovers did at The Wild Blue in Fresno during the spring or summer (I think) of 1987.

But before we get to that specific version, I need to say that — no matter what you think about his music, his appearances in films, or anything else about Jonathan Richman — you really need to see him perform at least once in your life. Preferably in a small club.

And I say that even though I haven’t seen him since the mid-1990s, but for whatever reason, his plainspoken, open hearted songs just work better when the man himself is standing right in front of you.

Especially a song like “Affection,” where perhaps a cynical hipster type might just sneer at the complete lack of irony in the lyrics.

And especially, if — in let’s say 1987 — that cynical hipster type was far more into the reissue of The Modern Lovers than they were into the quieter more acoustic songs Jonathan had been making in the previous decade.

And during a trip to Fresno where he also found time to be filmed being interviewed by Big Jim the Janitor (or at least I’m assuming it was the same time), Jonathan Richman blessed us with a magical version of “Affection.”

At that point in 1987, I will say that we probably weren’t the easiest crowd: many of us were in bands or hanging around in bands and still that age where the most important thing in public was to be perceived as cool and above-it-all.

Well, there’s telephones, televisions, and cars, yes
And there’s records and books and magazines for you
But poor affection sits there standing in the corner
Saying to itself, “I wish someone
Would give me something to do”
Well, I know it takes nerve
To reach out and give affection
To folks who seem to want your touch
But you can’t tell
Cause they can laugh at you
And that’s rejection
And you probably won’t like that so well

But halfway through “Affection,” I saw people just weeping, because his words were going straight to them, and causing them to think about what ever going on in their own love lives — and as a bunch of twentysomethings, that meant constant turmoil — and it was like getting permission to not be cool in public, but to react the way they did in their most private, scariest moments.

It was weird and wonderful, and I never saw it happen again quite the same way with any other performer.