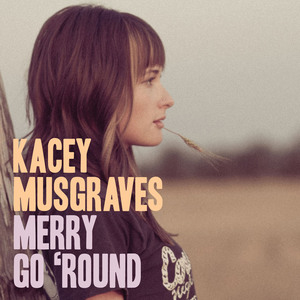 Kacey Musgraves is one of the leading lights of what might be my favorite pop music trend of this decade, female country-adjacent singer-songwriters who write their own songs and plot their own course. Obviously Miranda Lambert, but also Brandy Clark, Sarah Shook, Nikki Lane, Margo Price, the list is way longer than you might thing.

In Kacey Musgraves case, she’s been able to balance what are progressive lyrical viewpoints while remaining within the Nashville machine enough to enjoy a huge amount success with both of her albums (and a well-regarded Christmas record).

And why not? And while she doesn’t really do a lot of the uptempo songs that often signify toughness, at her best, Musgraves combines clever wordplay with pretty melodies and her crystal-clear voice. A perfect example is the chorus of her first single, “Merry Go Round,” which has fun with homonyms while at the same time making social commentary.

Sung over a quietly insistent beat and with little more than a banjo as a lead instrument, a song like “Merry Go Round” could have easily gone the route of overproduction — especially given that she’s also trying to make a point about people who fall into desperate lives because they think that’s the only choice they have — but it’s the confidently low-key affect that I think makes it work so well.