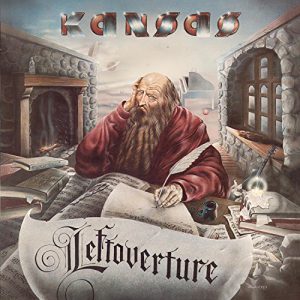 And while in some cases, the later commercial success meant people went to their back catalog — KISS, AC/DC and Rush in particular — in a lot of other cases, not so much. So, the pre-success records of Foghat or Journey or Kansas are doomed to toil forever in obscurity, loved only by the people who really loved what that band brought to the table.

So, you could be forgiven for assuming that Leftoverture was the first album by Kansas, especially since its huge single, “Carry On Wayward Son” practically invented the AOR sound that would dominate the rest of the decade. Well, along with “More Than a Feeling.”

Without those songs as a signpost, maybe Mick Jones (the other one) & Lou Graham wouldn’t have decided to combine forces and maybe Greg Rolie & Neil Schon might have continued their jazz-rock odyssey and not go full-out pop with their helium-voiced discovery. Hell, maybe Loverboy wouldn’t even have existed!

But that’s just wishful thinking. Perhaps there was something in the wind (not dust, never dust) that caused this whole phenomenon to happen. More likely it was $100 bills in one of those whirlwind booths, and all of the bands decided to crowd into the booth in order to grab as much as they could.

And, naturally, it went on and on: it opened with the acapella chorus in massive harmonies, followed loud guitars battling an organ, boogie riffs, guitar solos, all of which happened before the first verse! When they finally got to the first verse — after stopping the whole song with a massed “ahhhhh” — it was just a dinky piano part so you could tell that the lyrics were incredibly profound.

Once I rose above the noise and confusion
Just to get a glimpse beyond this illusion
I was soaring ever higher, but I flew too high
Though my eyes could see I still was a blind man
Though my mind could think I still was a mad man
I hear the voices when I’m dreamin’
I can hear them say

Look, I’m making fun of “Carry on Wayward Son,” but I’ve always loved its ridiculous over-the-topness. It’s one of those songs that I’ve memorized, but only because I heard it on the radio approximately a zillion times in the late 1970s, as it was yet another song that straddled that AM/FM divide with perfect precision: the single went to #11, but it was also clearly progressive enough to be played on FM stations that just didn’t get the same response when they played a deep cut like “Magnum Opus.”

And of course I heard it on the radio a zillion times because I never changed the channel when it came on.

Which was the only time that really happened: I thought “Point of Know Return” was OK, and I’ve hated “Dust in The Wind” from the moment I heard it. That said, they’ve stuck around over the long decades, though how many original members exist is not a thing I’m going to research. My guess is that it’s all about the trademark at this point.

And the rush they get every single time the whole crowd lights up every time they start this song.