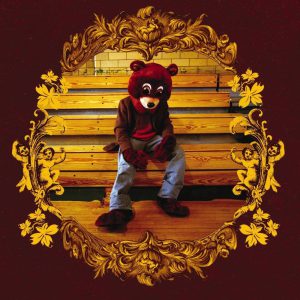 Heh. But Jimmy Page is one of the greatest guitar players ever, you say. Yeah, but it will be my argument when I get to Zeppelin in a couple of months that for all of Page’s awesomeness as a guitarist, his true genius resided in how he layered those guitars.

On a song like “School Spirit,” from his 2004 debut The College Dropout, back when his insane ambition seemed more charming than scary, listen to how the voices act like guitars right from the opening chant/riff.

And with a speeded-up Aretha Franklin sample providing commentary and licks throughout, “School Spirit” is free to have Kanye and Tony Williams rap, sing and “whoo” whenever they want until they wordlessly hum together at the end.

I’ll fully admit that I didn’t get all of this until just a couple of years ago. I checked out The College Dropout when it came out — it was pretty inescapable — but it wasn’t until I went back to revisit his records in the wake of My Beautiful Dark Twisted Fantasy that I think I fully appreciated what he was doing.