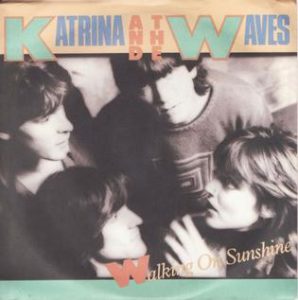 With a punked-up Motown beat, joyous horns and Katrina Leskanich’s singing-it-with-a-smile vocals, “Walking on Sunshine” is a pure up before it ever gets to the chorus, which gets over with every single “whoooooooa” Katrina belts out between the title.

“Walking on Sunshine” is now stuck in your head, isn’t it? Do you hate me yet? Heh.

But the part I like isn’t the verses or the ever-ascending chorus, but rather the bridge, which basically invokes The Handclap Rule to help support a rolling and tumbling Kimberly Rew guitar sting while Katrina just goes off about love and sunshine until gliding back into the chorus.

And don’t it feel good?