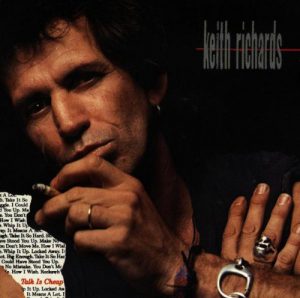 Which doesn’t mean I didn’t try: at some point in the mid-80s I came up with, well, my weird riff on Metamorphosis where I woke up not transformed into a cockroach, but rather transformed into Keith Richards. “What is this I’m feeling? Holy fuck, it’s a craving for heroin.”

Also, there was something about maybe killing Brian Jones — and wanting to kill Mick Taylor — but that was muddled, at best.

Luckily, that was as far as I got, both in terms of writing the story or ever trying smack, but when Keith’s first solo album came out, during that period where the future of The Rolling Stones was seriously in doubt — the super-shitty Undercover and the not-as-bad-as-you-think-it-is Dirty Work plus Mick’s mid-life crisis equalled a defacto break-up for awhile — 25-year-old Jim was all over it.

And yeah, even though I noticed that he managed to get that skull ring into every single bit of promotional material — including the Talk is Cheap poster I hung on the wall of the living room where my band was practicing — it didn’t even matter, because deep in my heart of hearts I knew that what I needed after the dark dark summer of 1988 was something that would give the same buzz that I got from Some Girls or Tattoo You, and if Mick didn’t want to play along, well then fuck him.

Sure, Keith can’t sing as well as Mick, but then neither could anybody else, so what difference did it make? Gimme riff, please.

So naturally, Keith, contrary fucker that he is, started Talk is Cheap with “Big Enough” a nice enough piece of Al Green soul that I pretty much skipped over starting with my second listen to the album in favor of “Take it So Hard,” which was pretty much exactly what I needed right then and there.

There is no sound in the world like a great Keith Richards riff — warm and dangerous, off-kilter and on point — and with Charlie Drayton playing the Charlie Watts role, “Take it So Hard” had me from the git-go as Keith — his phrasing torn and frayed, the notes he held slightly off, began:

Giving up lovin’, easy to do
People so pitiful
They never come through
Honey, honey, honey I ain’t that way
(You want a little bit)
Once in a while
Come on and get a bit


I loved the way Keith’s “Once in a while” bounced off of the backing “You want a little bit”, but it was the chorus, with Keith’s raggedy vocals counterpointing with the slickness of the rest of his X-pensive Winos in a riff-driven round robin:

Add to all of this calculated chaos a great, concise solo by Waddy Watchel while the rest of the band interjects random “yeahhhhhhhhhhhs” and the result was that “Take it So Hard” was absolute and utter rock and roll nirvana for me, a song that I was absolutely obsessed by for the last part of 1988.

And given the summer that I’d had, pretty good advice, as well, which I’m sure I wasn’t even realizing as I cranked it up and sang along in my car every chance I got.

“Take it So Hard”


“Take it So Hard” performed live at the Hollywood Palladium, 1988


Official Music Video for “Take It So Hard” (poor sound)