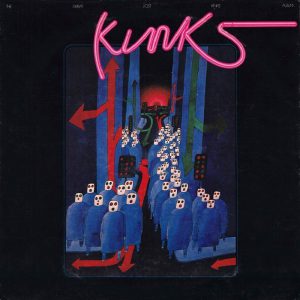 BRIAN
“Look, you’ve got it all wrong!

THE CROWD
“YES! WE’RE ALL INDIVIDUALS!”

THE CROWD
“WE’RE ALL DIFFERENT!”

It’s weird how a Kinks b-side that was written for — and rejected by — The Animals, that doesn’t sound like anything else they’ve ever done, and was sung by Dave not Ray has become one of the absolutely most beloved songs in their canon.

I mean, at least for true believers, as the only official LP releases that “I’m Not Like Everybody Else” ever graced for the longest time was the long-deleted Great Lost Kinks Album. And while it has shown up as a bonus track on reissues of Face to Face and The Kink Kontroversy, it’s not like its been widely disseminated.

That said, because “I’m Not Like Everybody Else” is so instantly unforgettable, it’s been passed among Kinks fans like secret knowledge, and I remember dancing more than once at the Blue or the Oly as Fresno’s own garage-rock demons The Town Cryers did doing their own rousing version of it, while hoping that somebody would ask me “what the fuck was that song?”

And, of course, rousing is the only way to do “I’m Not Like Everybody Else,” as it starts with a slow, majestic guitar opening and Dave’s calm vocal menace but transitions to wild abandon on the shout-along chorus:

On that chorus, with Mick Avory kicking into double-time with the drums and the guitars stabbing hard on every beat was Ray and (probably) Raza Davies are singing the ooooooooohhhhs and the harmonies in full support of Dave’s individuality, The Kinks get as large and anthemic as they ever have in their career.

There’s a constant tension in “I’m Not Like Everybody Else” as it shifts from the quieter parts to the louder parts seemingly at will while, instead of playing the solo you might expect, Dave whips his guitar around like a pissed-off tornado looking for something, anything to destroy.

It’s that constant unresolved tension, as much as the anthemic qualities of “I’m Not Like Everybody Else,” that makes it so awesome.

Also pretty awesome: Ray Davies wrote an anthem declaring his individuality and then didn’t want to sing it. And so after The Animals turned it down — good job, Eric Burdon! — he could have easily sung it himself, but instead he gave it to the one person in the world that the rest of world perceived as being the closest to him: his little brother.

Which is why, at the end, it’s a beautiful and poignant thing that Ray and Dave — over handclaps! — start trading off “Like everybody else” with each other as Dave’s tornado guitar winds “I’m Not Everybody Else” to a conclusion.