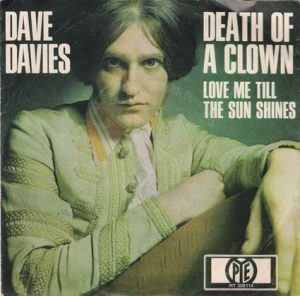 “Death of a Clown” is a weird bird in Kinks world. Not only was it originally released as a Dave Davies solo single — which reached #3 on the U.K. charts! — it’s one of the very few songs credited to both Davies brothers.

None of which I knew, of course, when I first bought Something Else by The Kinks back in late 1980 during a phase where I dug heavily into the late 1960s Kinks. I’m not even sure if I knew it was Dave singing, which of course seems obvious now, but I was trying to absorb The Kinks without questioning much at that time.

And that said, the co-credit was a bit of a mislead: the lion’s share of the tune and words are all Dave, with Ray contributing only the — admittedly key — background vocal hook. And even though Dave was still a bit clunky on the lyrics front — at one point he sings “trainer of insects” instead of the more natural-sounding “insect trainer” — the pathos of “Death of a Clown” shines brightly.

Fitting in musically with that run of Kinks singles that had a vague countryish feel, “Death of a Clown” was an allegory about party animal Dave trying to get himself right as he matured into his early 20s:

At first, Dave sounds scared and lonely, all by himself — after all, the clownish behavior he’d been indulging was often fun, and who would he be after his clown persona died?

But then — out of nowhere — the etherial vocals of secret weapon Rasa Davies come in for the hook: La-la-la-la-la-la-la-la-la-la, and the mood picks up. He has support from his sister-in-law, at least vocally.

Eventually his brother — who wrote that hook — also joins in, and soon everybody is singing the chorus together, and “Death of a Clown” is transformed into a weirdly joyous party celebrating the end of partying.

“Death of a Clown”