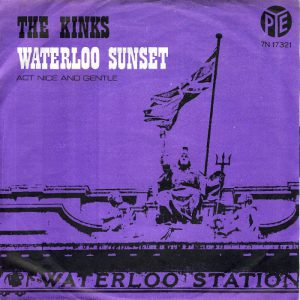 One the short list of Prettiest Songs Ever Recorded, Every Song Ever Division, “Waterloo Sunset” is an absolutely titanic achievement. It’s usually listed as Ray Davies’ greatest song, and it’s really on a par with only “You Really Got Me” in terms of impact and influence.

And there absolutely no disagreement here: when I first got Something Else By The Kinks, I played the entire album — learned to love the entire album, really — in order to get to hear “Waterloo Sunset” another time.

If the one complaint you could make about Something Else By The Kinks is that its sound is a little bit primitive and muddy, then “Waterloo Sunset” turned that on its side: the muddiness helped make it mysterious, from that shimmering descending opening riff to the roundelay that closed it.

I mean, just listen to that first verse. With a ringing acoustic guitar as a foundation, “Waterloo Station” instead deploys layers of vocal harmonies — dominated by secret weapon Rasa Davies — and Dave Davies understated guitar hook to play off of the lyrics.

And about that guitar hook. Dave has always been kinda slagged — often by his own brother — as being an undisciplined guitar player, but his guitar playing on “Waterloo Sunset” is precise and masterful, supportive and plaintive.

As are his “Sha-la-las” leading into the chorus as his guitar swaps out leads for chords.

Let’s remember something. This is a song about a fucking tube station. Public transportation. Sure, it’s near the Thames, and, yeah, the sun would set over the Thames if you were sitting on top of Waterloo Station, but in the end, it’s still a train station he’s forever mythologizing.

Terry meets Julie, Waterloo Station
Every Friday night
But I am so lazy, don’t want to wander
I stay at home at night
But I don’t feel afraid
As long as I gaze on Waterloo sunset
I am in paradise

But of course, train stations also represent endless possibilities, and so, Ray’s narrator fixates on a couple — Terry and Julie — who meet there every Friday night to go out and explore those possibilities. And Ray isn’t jealous, he isn’t sad, but rather wistful as he realizes that all he needs is his view of their possibilities as the sun sets.

This whole time, Dave’s been playing his guitar hook, Raza’s been alternating “oooooooooooohs” and “la-la-las” and you’re completely immersed in the song. Somehow the waterloo sunset has become the entire world; nothing else even exists — just the train station, the river, the sunset, and of course Terry and Julie, who have also noticed it.

That’s us. That’s all of us. In paradise, with the sun eternally on the verge of setting and the golden hour twilight illuminating the whole world around us now and forever. And in that moment of paradise, we can believe that the sun is never actually going to set.