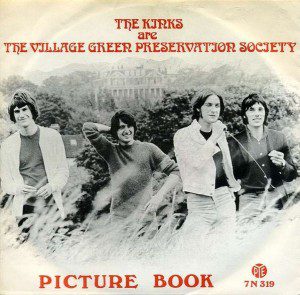 Two years in the making, with multiple configurations — there was a scrapped U.S. album that featured about half of these tracks called Four More Respected Gentlemen — and the entire Something Else By The Kinks album recorded after the Ray Davies had the original concept, there is absolutely no reason The Kinks Are The Village Green Preservation Society should hold together as well as it does.

But it does, of course, and that goes to the incredibly high quality of the songs that Ray Davies wrote, the singularity of his worldview — especially for the late 1960s — and the quantum leap in musicianship in his band. Not to mention the trust he’d earned. In 1964, Dave Davies would have laughed at songs like “Animal Farm” or “Phenomenal Cat,” but just a few years later, he provided the voice of the cat.

And while it didn’t sell shit when it came out, over the years, The Kinks Are The Village Green Preservation Society has become one of the universally acclaimed albums from the British Invasion, and probably the album that most self-respecting hardcore Kinks fans — me excepted — would consider their favorite.

And why not? From the moment it kicks off — gentle acoustic guitar layers, an organ and low-down lead guitar doubling a hook — “The Village Green Preservation Society” establishes a mood. A mood that is echoed by the quietly stacked harmony vocals.

The Kinks had never really had vocals like this before, and the fact that Ray Davies, Dave Davies, Pete Quaife and secret weapon Rasa Davies were all singing en masse — but gently — emphasized the “we” in the lyrics. From the start, it felt like a full-band effort in a way their previous songs really hadn’t.

It was gorgeous and glorious, and if you listened to what Mick Avory was doing on drums, rocked harder that you might originally expect. Instead of amping up the guitars, “The Village Green Preservation Society” went through modulation after modulation as they listed all of the things they wanted to save or appreciate — Dracula, draught beer, custard pie, little shops, billiards, etc. — always circling back to the thesis statement of not just the album, but perhaps Ray Davies’ entire career.

Preserving the old ways from being abused
Protecting the new ways, for me and for you
What more can we do?

Davies had always been a man out of time, trying to cope with forces of change that he couldn’t quite — or didn’t care to — comprehend, and The Kinks Are The Village Green Preservation Society is the sound of him trying to come to terms with it and let that be the theme that dominated the next phase of his career, God willing.

So when they end the song with a hopeful “God save the village green,” it eventually got turned what Ray meant the whole time: “God save The Kinks.”