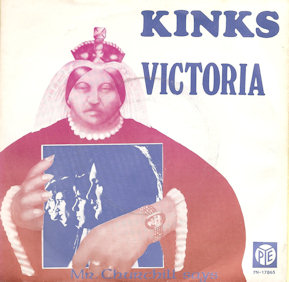 The resulting juxtaposition of grand historical events — the reign of Queen Victoria, two World Wars, the invention of the automobile, post-WWII prosperity and the overwhelming obsession with the Royal Family — with the more personal story of Arthur resulted in what still might be the greatest concept album anybody has ever created (And an inductee into the Medialoper Bebop Great Albums Hall of Fame.)

With John Dalton replacing the now departed Peter Quaife, the music got bigger as well. Like Ray Davies needed bigger, louder songs filled with joyous backing vocals, unexpected horn parts and shittons of Dave Davies lead guitar strangeness. Especially that last part: this is Dave’s best album by a million miles, and he owns it from the moment he unleashes the double-tracked guitar playing the opening melody line of the rousing “Victoria.”

Long ago life was clean
Sex was bad, called obscene
And the rich were so mean
Stately homes for the Lords
Croquet lawns, village greens
Victoria was my queen

That’s followed by the whole group shouting Victoria’s name over and over again over yet another long descending guitar line and a hailstorm of 12-strings, it’s like they’re trying to summon her to come out and play with them on a long cool British summer night. “Hey Victoria, check out this cool Chuck Berry riff we copped!”

But they’re really just getting started: at some point the whole song just stops and they salute Her Majesty with a blast of majestic horns:

After that, a long guitar solo, repeated exhortations “Victorrrrrria” and a general sense of chaotic camaraderie. Like so many of the songs that follow it on the album, “Victoria” sounds like one gigantic party, the kind of party that you would never forget if you could only remember what happened.

For the first time in ages, The Kinks were displaying the same kind of hard rock chops that their peers in The Who and The Rolling Stones seemed to exude naturally, and after three straight albums of ever-quieter songs, “Victoria” signaled that The Kinks were ready to try and match their peers with the big riffs while not giving up a whit of Ray Davies’ observant songwriting.