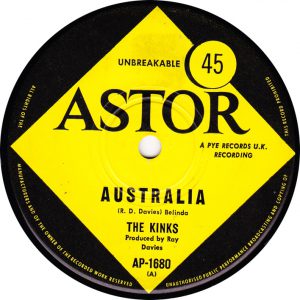 After all, just listen to this pitch:

And indeed, why not? With Dave playing a low-down lead guitar, and a full complement of call and response vocals, Ray continues his pitch.

The first part of “Australia” is all forward momentum, doing everything it possibly can to generate as much enthusiasm, describing a near-utopia where everybody is always walking around smiling and singing sha-la-la-la-la-la, and then the song breaks down to a near crawl, and Ray repeats a point he’d already made earlier, but is important enough to repeat:

We’ll surf like they do in the U.S.A.
We’ll fly down to Sydney for our holiday
On sunny Christmas Day
Australia
Australia

It’s here that “Australia” does something weird for a Kinks song: a long, long, long, long guitar solo. In fact, Dave Davies solos for the next four minutes. But it’s weird: while he never stops, he’s never really the pure focus.

It’s like his guitar solo is the engine noise of the long flight from England to Australia, and while that noise never goes away, you’re not always fixed upon it, either. And so we have the piano fading in and out, a horn section blasting away and then disappearing, Mick Avory doing his best Keith Moon impersonation at points, and just when you might be thinking “wait, what the hell am I doing this for?” the ghostly voice of Ray Davies reminding you not just where you’re going, but why.

There are points where the whole thing feels like it’s going to crash into the ocean, but it never even comes close, and instead slyly builds and builds until the plane finally lands, and you find yourself on the ground in Australia. Good luck!