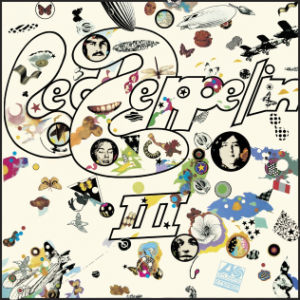 OK, now they’re just showing off. Because “Out on the Tiles” is fucking ridiculous.

Opening with a guitar-drum duel that found Jimmy Page & John Bonham in perfect synch as they bore straight to the middle of the earth, “Out on The Tiles” is yet another combination of brutal pummeling and lighter-than-air fireworks.

I know that Robert Plant is singing on the verses. I register that he’s got words going on, but honestly, I’ve never paid attention, because “Out on The Tiles” is all about the crazy-ass shit that Page & Bonham are doing nearly every single moment: first they’re utterly together, then Page lays out for a bar or two and then he tornadoes from the top while Bonham feints left and swerves right.

It’s almost impossible for me to listen to Bonham’s stop-time snare/crash parts and not air drum. I’m doing it right now while writing this piece in a public place and I don’t give a shit. It might not be his best drum part ever, but it’s damn damn damn close.

At some point, someone yells “stop,” but nobody pays attention, because they’re all having too bloody much fun. That’s the thing about “Out on Tiles,” as heavy as it is — and it’s one of the heaviest songs in their entire repertoire — it sounds like they were having a grand old time in the studio. Shit, Page didn’t even bother with a guitar solo because all of his rhythm parts said everything he wanted to say, especially at the end where he’s just riffing and riffing while Bonham encircles him with drum rolls.

There was a song like “Out on The Tiles,” I think, on every subsequent Led Zeppelin album: a song that danced around on impossible riffs plastered on top of unlikely rhythms and yet didn’t take itself too seriously. Zeppelin was always too grand and absurd to be overtly funny in their music, and the one time they did, “The Crunge,” didn’t quite work, even if “where’s that confounded bridge?” entered the 1970s lexicon.

But once they got huge, I would argue, they got more fun, taking themselves less seriously while the world took them more seriously, but never ever losing the insane interplay that made them great in the first place. And when it all came together, like “Out on the Tiles,” there really was nothing else ever like it.

“Out on the Tiles”