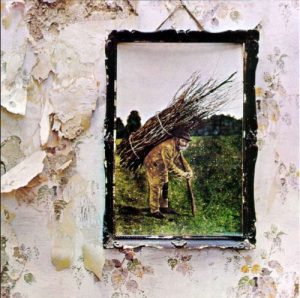 The “Smells Like Teen Spirit” of the Baby Boomers, “Stairway to Heaven” has, of course, become much much larger than a mere rock and roll song, but rather a key symbol of the era when rock ‘n’ roll became rock, as well as arguably the most important thing not just in popular culture, but the culture at large.

Of course, that’s just the young teenage boy in me speaking, and I’m pretty sure that I remember people talking about “Stairway to Heaven” before I experienced it firsthand. In fact, I’d like to report I remember the first time I heard “Stairway to Heaven,” that it was some kind of lightning bolt or something, but no. I’m sure that I caught it somewhere in the middle, during some tuning of the radio dial looking for new sounds, or maybe Craig from across the street played it for me.

Or maybe it was always there. Maybe our collective understanding of “Stairway to Heaven” being recorded and released by Led Zeppelin in 1971 and subsequently played on the radio and from car stereos forever and ever and ever is completely wrong. Instead, maybe “Stairway to Heaven” was the first tune thought up by the first being who stumbled from speech into song, and it’s been passed through the stars for countless untold millennia until as part of Jimmy Page’s deal, he was able to get it recorded.

I mean, for me, that “I never need to hear this fucking thing again” point came at some point in the early 1980s — and so it never made any of my Zep compilations or mix tapes — and I’m still not sure that putting it on to listen to while I’m writing this post isn’t the first time I’ve purposely chosen to listen to “Stairway to Heaven” in decades.

But, of course, I still remember every single note.

And, you know what else? It’s a fucking amazing song. No, really. I realize that it’s become the cultural punching bag that it has, and the whole “Taurus” lawsuit controversy (to me as always, it ain’t about whether or not you still a riff or a lick or a tune, but what you do with it) sure as shit didn’t help, but — thought exercise! — just pretend like you’d never ever heard “Stairway to Heaven” before and try to appreciate it anew.

The quiet picked acoustic opening.
The loneliness of Robert Plant’s vocals.
That fucking wood recorder in the other speaker from the guitar.
The strummed guitars underneath the first “ooh, it makes me wonder.”
The lyrics that skirted between utter nonsense and utter wisdom.

All together now: “Does anybody remember laughter?”

Robert Plant has never struck me as a guy who has too many regrets — he does what he does, he’s done what he’s done, and moves ever forward — but I’m going to guess that his interjection of “does anybody remember laughter?” after that verse in The Song Remains The Same would be one of the few. Yes Robert, we remember laughter. As a matter of fact, we’re laughing at what you just said.

At some point John Bonham’s drums come bustling through the hedgerow, changing the song for good even while he underplays at first. No thunder, not real rolls and he even plays the ride cymbal for one of the few times I can remember — Bonham was a hi-hat guy through and through — while Plant moans the second “it makes me wonder” part. That said, once Bonzo is aboard, you know it’s only a matter of time before you realize that not only does your stairway lie on the whispering wind, Jimmy Page is going to drag you up the damn thing with his double necked guitar. And in The Song Remains The Same, he’s going to split into a mirror image of himself while he does it, because only Jimmy Page can do that!!

If the first half of “Stairway to Heaven” was all glimmering ladies prancing around with silvan elves looking for the piper, the second half is what happens when you get there: a glimpse of awesome overwhelming power. I know rocker dudes — hell, I was probably (OK, definitely) one of them — who barely tolerated the first half of “Stairway to Heaven” in order to get to the second half, but of course it only works with both parts.

So when it’s suddenly Bonham, Jones and Page in fanfare lockstep, it’s impossible at first to know what’s going to happen next, even though the second it happens, it was clearly preordained from the start. The start of time, that is.

Jimmy Page’s guitar solo. If you want, I can sing it for you. Listen to how it holds just a bit too long on the first note, as both a tease and a warning, before exploding into a meteor shower bringing light across the darkest night possible, lighting your way up the stairway as another guitar cries from the void below until they’re both screeching right into the final verse.

Nearly as good as the guitar solo: the extraordinary rhythm guitar that Page unleashes as a counterpoint to Plant’s searing vocals:

With the ferociousness of Page’s rhythm guitar doubled by Jones’ bass, that last verse didn’t have to be profound to seem profound. Especially given that Bonham was sliding down the stairway with every single ferocious drum roll and cymbal crash. It didn’t even seem like the same song that they had started with, yet when Plant tops it off with one last lonely-sounding “and she’s buying a stairway to heaven” that’s only thing it could possibly be.


“Stairway to Heaven” from The Song Remains The Same