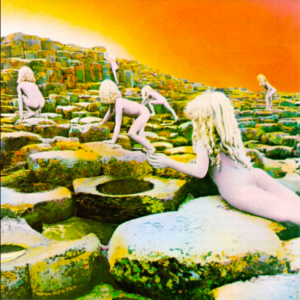 Houses of the Holy was a weird album.

Or at least to me, it’s always been a weird album. And so I’ve always kinda underrated it. Part of it was that it had the first two Led Zeppelin songs I ever really heard: “Over The Hills and Far Away” and “Dy’er Maker.” It also had couple of slow ones that took me forever to warm up to (and I’ve never quite got “The Rain Song”), as well as songs with weird rhythms, insanely high-pitched vocals and just about anything except for a straight-out pile-driving riff song like “Whole Lotta Love,” “Out on the Tiles” or “Black Dog.”

The closest they came, I guess, was “Dancing Days,” which is anchored by a pair of mewling, overdubbed guitar riffs and John Bonham’s reliably huge drums for 3:43 while Robert Plant rambles on about the return of the dancing days for awhile until he rides Page and Bonham straight into one of their most endearing choruses.

Which actually gets to something Tim said the other night when we were discussing this song: unprompted, he said that it was an amazing pop song. And he’s right! Even thought it wasn’t a single, it’s got a simple verse-chorus-verse construction, enough guitar hooks to fill a tackle box, relatable lyrics, and is catchy as all hell.

“Dancing Days” is also proof that Zep really didn’t care all that much about singles. I know that both of the singles from Houses of The Holy did pretty well, because I was listening to Top 40 radio like a fiend in 1973, but had they bothered to care, I still think this hypnotic banger would have done even better on the charts.

So maybe what I find so strange about Houses of The Holy is that it was kind of Led Zeppelin’s attempt at a straight pop album. Or a pop-funk album, I guess. Or mostly.

It’s just always felt like a departure. Clearly, Led Zeppelin also thought so, or else they would have called it Led Zeppelin V.

In the early 1990s, my close personal friends The Miss Alans covered “Dancing Days,” which could have been seen as uncool for an indie-pop band of the era, but instead, it somehow fit right in with their originals in the same way that their covers of “Earn Enough For Us” or “Save it For Later” did.