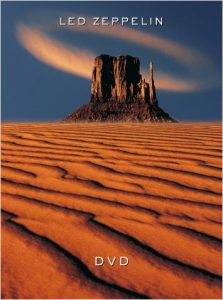 That all changed when I saw & heard this version from the career-spanning DVD (called, of course, Led Zeppelin DVD) that accompanied How The West was Won in 2003. For the first time ever, really got “Kashmir.”

On this live version, it’s all about the performance: Robert Plant scatting and missing notes and improvising howls, John Paul Jones playing that imperial forces advancing on the rebels riff on the keyboards, Bonham doing extra drum rolls where they don’t belong and Jimmy Page tossing in little fills for the hell of it. It made “Kashmir” feel like something that was made by humans after all. Something fun. Which I’ve never gotten from the Physical Graffiti version.

What I always loved about Led Zeppelin was that — at the heart it all — they were just four guys who stood around in a room and just played together. Or at least it sounded that way. Even on songs with a shitload of overdubs, there was always that feeling of the basic track they all did together. And they really fucking enjoyed it, no matter massive their songs got.

That’s what I get from the Knebworth version of “Kashmir,” the ongoing vibe of “man, we’re really getting away with this, aren’t we?”