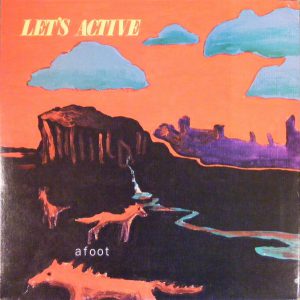 With the benefit of 35 of years of hindsight, it’s clear that we came to Let’s Active backwards in 1983. Maybe on the East Coast it was like, “finally the other guy from the Sneakers is recording more songs,” but of course, our crew in Fresno was all, “whoa, R.E.M.’s producer has a band!”

When Afoot was released, of course, Easter had already produced both Chronic Town and Murmur, and so quite naturally, interest was high. And Afoot delivered a half-dozen weird, quirky power-pop songs, leading with the insta-classic “Every Word Means No.”

From the moment Easter’s guitar kicks off the ringing central riff, doubled almost instantly by bassist Faye Hunter & drummer Sara Romweber, “Every Word Means No” is a massive hook machine, but is also . . . just a bit off. Like his buddies in the dB’s, there’s a pretty large Big Star influence going on, but mostly in the fact that they liked to add little bits to keep the song from being too rote while always retaining a crazy amount of melodicism.

Which is why “Every Word Means No” has such a classic chorus, where over Romweber’s double-time drums Easter sings:

It’s also roughed up a bit when Hunter comes in just ever so flat on the harmonies for “no-oh-oh-oh”. Because it’s not quite perfect, it’s that much more memorable.

Halfway through the song, there’s another swirling guitar hook, an instrumental section that meanders through a guitar & bass conversation, a bridge where Easter actually uses the word “anathema,” and finally, back to the super-pop verse and final choruses.

It all adds up to a helluva debut single and an absolute college radio staple. And a song that I just discovered that Smashmouth covered. OK.

Also, the video featured the band singing the song at some adorable puppies.

“Every Word Means No”


Official video for “Every Word Means No” (muddy sound) (but puppies!)