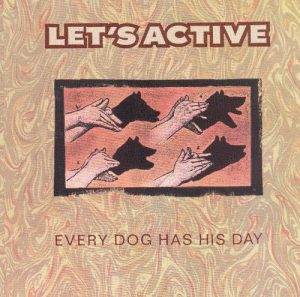 I never fully loved any of the three full-length albums that Let’s Active put out in the 1980s.

While Mitch Easter was a helluva guitar player and an ace producer, he wasn’t — to me!! — quite able to put together a full album’s worth of good songs. Of course, I haven’t listened to any of those records in nearly 30 years, so I suppose I could change my mind if I heard them now. But, trust me, I gave them plenty of chances back in the day.

That said: there were some fine songs on all three records: “Flags For Everything” on Cypress, “In Little Ways” on Big Plans For Everybody, and most especially the psychedelic “Mr. Fool” from their swan song, Every Dog Has His Day.

I love that opening verse: in 1988, it was the kind of insult that slacker me could completely laugh at while looking around nervously.

With second guitarist (and Paul Westerberg muse) Angie Carlson laying down an acoustic guitar bed and singing that opening verse while Easter swirls backwards guitar throughout, “Mr. Fool” — like a lot of the songs on Every Dog Has His Day — was ever-so-much-more rocking than Let’s Active’s previous work.

But of course, all psychedelic power-pop songs live and die on their chorus, and “Mr. Fool” lived because of the melding of Carlson & Easter’s voices on its tremendous chorus.

Better sit down for this piece of news
There’s no more time to lose, Mr. Fooooooooool

With Easter overdubbing multiple guitars for the multiple solos, some backwards, some forwards, “Mr. Fool” never stopped surprising, as you quite never knew what he was going to do next, and it didn’t matter as long as they came back to that chorus.

Mitch Easter, of course, never stopped producing, and most recently he’s been a key person in the indie-all-star revival of Big Star’s Third, along with his old bandmate Chris Stamey.