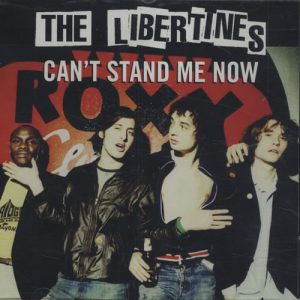 When they came out, you might remember that The Libertines were posited as the U.K.’s answer to The Strokes, but outside of being obvious rock stars from the get go, the two bands couldn’t have been more different.

With The Strokes, every single note was hammered into place by precision nanobots, whereas every note played by The Libertines seemed utterly shocked to exist in the first place.

Theoretically, I prefer the second approach, though I never thought than either of the two Libertines records lived up to my platonic ideal of a two-guitar, two-songwriter punky British band produced by Mick Jones. Said platonic ideal is, of course, The Clash, which was hardly fair to Carl Barat & Pete Doherty.

But who said rock ‘n’ roll was supposed to be fair? So I liked their debut Up The Bracket fine, even if it didn’t have a song that I absolutely died for, a song that made me want to listen to the whole thing just to hear that song again.

Which wasn’t the case for their second album, titled The Libertines (because why not), which started with their greatest song, the frenemy anthem “Can’t Stand Me Now,” which worked by leveraging the simple trick of having the crunchy guitar in one speaker and the trebly guitar in the other speaker.

Before they sing a single word, “Can’t Stand Me Now” has already become an all-timer as both guitars circle round and round each other in the same love-hate dance they’re singing about.

As Barat and Doherty are trading words about their relationship, the guitars dodge and weave as they build up to an absolutely classic chorus.