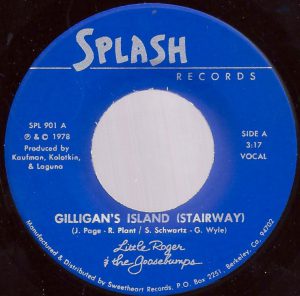 If there were two things that were utterly inescapable in the 1970’s, those two things were hearing “Stairway to Heaven” on the radio and reruns of Gilligan’s Island on TV.

As someone who experienced shitloads of both throughout that decade, I can’t tell you how pleased I was when I first heard this on the radio. Who would have thought that you could combine two totally different pieces of music — the words from the theme song of Gilligan’s Island and the music of “Stairway to Heaven” — to create a third one?

Well certainly not Led Zeppelin’s lawyers, I guess. They threatened to sue, and instead of being held up as one of the precursors to mash-up culture, “Gilligan’s Island (Stairway)” is kind of a footnote. But an incredibly funny footnote, it says here. (And Robert Plant agrees with me.)

What I like about “Stairway to Gilligan’s Island” (as it eventually became to be known) was that Little Roger & The Goosebumps didn’t even pretend that they were as good of musicians as Led Zeppelin, so when they get to the guitar solo, the guitarist plays the opening flurry of notes but goes off on his own thing for a bit.

And after that, the falsetto the singer uses to try to hit the notes that Robert Plant hit effortlessly is piss-poor at best. Which just makes it funnier. “And for the the courage of the crew-hoo” kills me every time. But of course, it didn’t matter. None of it mattered, because they figured out how to sing the words of “The Gilligan’s Island Theme” to the music of “Stairway to Heaven.”

Just that in and of itself was so awesome that it didn’t even matter that they used “and the rest” instead of “the Professor and Mary Ann” in the verse just before the guitar solo.

Nearly 40 years later, mash-up culture is prevalent, of course. Digital sampling has made it easy to do all sorts of crazy combinations of music, which is great, of course. But not as great as putting the words to fucking “Gilligan’s Island” to the music of fucking “Stairway to Heaven.”