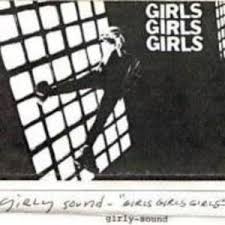 Two decades on, that’s just how it works, of course, and I’ve made loads more friends on social media in that time, but in the mid-1990s, it was still incredibly fresh and new and weird.

Anyways, at some point he sent me Girlysound, the already infamous set of self-recorded cassettes that Phair did before she put out Exile in Guyville. Nowadays, somebody would just fire up Garageband and be done with it, but of course, they would be losing the ineffable atmosphere that helped make Girlysound so effective.

And “(Sometimes a Dream) Is What Makes You A Slave)” is a microcosm of everything that I loved about Girlysound, right from the opening.

That opening is sung over a sad, ghostly acoustic guitar, and leads into one of the steals that are all over Girlysound — in this case, the chorus of The Jesus and Mary Chain’s “Head On,” but because her vocals are multi-tracked, she’s also singing her own words and melody against it.

It was actually almost a hip-hop trick: stealing someone else’s music or melody or words, but recontextualizing it in a new way so that it becomes its own thing. And she did it over and over on Girlysound — using bits from Johnny Cash, Malcolm McLaren and the Troggs to supplement what she wanted to express.

Also extraordinary: her guitar playing. It’s probably not technically great, and possibly out of tune, but it was aggressive on the tougher tunes, sadder on the melancholy tunes and smart and varied enough so that the limited amount of instrumentation on Girlysound never got boring.

On “(Sometimes a Dream) Is What Makes You A Slave” it circles around itself over and over again, perfectly expressing the rut she’s singing about.

“(Sometimes a Dream) Is What Makes You A Slave”