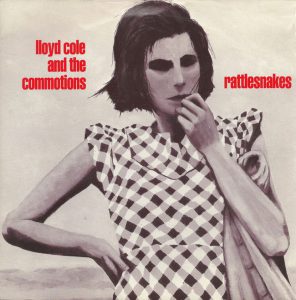 Anyways, as usual, it was the more up-tempo songs that jumped out at me, like the title track, which matched strings against Neil Clark’s deep acoustic guitar as Lloyd describes one of his eccentric love interests.

Normally, mid-1980s Jim wouldn’t have been interested in a song that layered that many strings on top of my beloved jangly guitars, especially one that has a breakdown that is pretty much all swirling strings and acoustic guitar. I mean, my turntable was littered with the corpses of bands like Aztec Camera and Prefab Sprout that were just too twee to make it all the way to my speakers.

But not Lloyd Cole. And I’m not even sure why, honestly. Maybe it was the wit of putdowns like “Must you tell me all your secrets / When it’s hard enough to love you knowing nothing” in “Four Flights Up.” Maybe it was the utter irresistibility of a name-dropping chorus like:

Of course, the internal rhyme in that first line is a cheat, as Lloyd willfully and playfully mispronounces “saint” as “saunt,” which clearly clearly influenced Neal Stephenson when he wrote Anathem, a reference that about 3 people are going to get.

And references were also part of why we loved these songs so much: felt like Lloyd Cole was discovering the same things we were discovering — the same places, books, films, music (there are Beatles, Velvets & Dylan references galore in his songs) — and was able to naturally insert them into songs the same way we were inserting them into our day-to-day conversations.