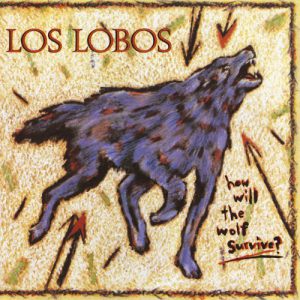 Los Lobos have been bringing it for over forty years now, playing an unique blend of roots rock, country, tex-mex, soul, and even experimental music whenever and however they see fit.

I drop in on them occasionally, and am continually impressed with their unassuming virtuosity and deceptively simple songs, my favorite of which is the almost title track of their 1983 breakthrough, How Will The Wolf Survive?

I say almost, because the song leaves off the “How,” and for decades now, I’ve wondered if that makes the song more or less pessimistic than the album title, and I think I’ve come to the conclusion that the song is more pessimistic, as the “how” assumes that the wolf will figure it out, it’s just a matter of methodology.

With the drums providing a solid, steady backbeat and the guitar playing an even more solid and steady lead over a spinning guitarron, David Hildago explains that pessimism.

Through the chill of winter
Running across a frozen lake
Hunters hard on his trail
All odds are against him
With a family to provide for
But one thing he must keep alive
Will the wolf survive?

I do wonder, however, how many times the producers of Game of Thrones have thought about using this over the closing credits of an episode that featured an Arya cliffhanger, though that would of course, totally break the Westerosi verisimilitude in a way that not even Ed Sheeran did.

Anyways, at the end of the song, the wolf’s fate is still very much in doubt, alone and on the run, we can only hope that he figures it out with the help from the guitar solo ringing out near the end.

Finally, gotta point out that I saw Los Lobos around the time this album came out. They were opening for The Clash (post Mick-Jones edition, sadly) at the Warnors Theatre in Fresno. This might seem like a strange opening band for The Clash, but they were often in the habit of having non-punk bands opening for them, and so Los Lobos fit right with that tradition. And they were booed. Because they weren’t punk, bad enough. Because they were playing rockbilly & Tex-Mex and looked like former KFSR Station Manager Gilbert Mosqueda’s (RIP) uncles and not the Stray Cats, worse.

But they were great. And survived just fine, thank you.

“Will The Wolf Survive?”