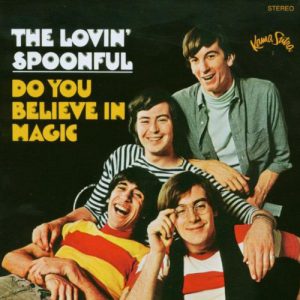 “Do You Believe in Magic?” was the first of several smash singles by the dirtily-named The Lovin’ Spoonful, and even now, it’s almost preternaturally catchy, with its bouncy chord changes, perfectly-placed “ahhhhhhhhhhhh” backing vocals, and guitarist Zal Yanovsky’s hooky licks and low-down guitar solo.

And of course, lyrics about getting lost in the music.

And maybe, if the music is right
I’ll meet you tomorrow, sort of late at night
And we’ll go dancing, baby, then you’ll see
How the magic’s in the music and the music’s in me

As sung with an open-hearted smile by Sebastian, that last line doesn’t come across as a brag, but more like him matter-of-factly pointing out how connected he is with his muse and the music that comes from it.

A half-century later, a sentiment like believing in the magic of rock and roll probably seems trite and silly, but there is a purity to the performance that I think still can melt even the most cynical heart.

“Do You Believe In Magic?”