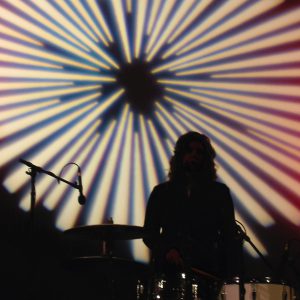 There are other lyrics on “Nothing But Heart,” and in fact, it opens up with Alan Sparhawk singing an entire verse by himself while a guitar groans in the background.

At that point the drums slowly kick in, and establish the beat they’ll be riding for the rest of the song, and Mimi Parker joins Sparhawk with the usual gorgeous harmonies.

Said chaos, of course, is unfolding at the usual unhurried pace: call it apocalypse in 2/4, as “Nothing But Heart” isn’t interested in running you over as you cross the street, but rather crushing you with a gradual increase in gravity.

It goes without saying, of course, that you’re singing along by, say, the fourth repetition, and by the 10th or 100th or 1,000,000th, you’ve been reduced to nothing but heart by this amazing song.