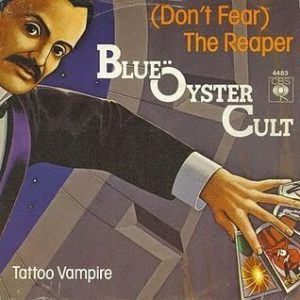 Well, yeah. Ya gotta have “(Don’t Fear) The Reaper.” An actual monster hit single that peaked at #12 the week after I turned 14, it remains deservedly culturally ubiquitous decades later. Not only is the central riff one of the most everlasting pieces of music ever recorded, the lyrical conflation of love and death make it one of the few songs both appropriate for certain types of weddings and certain types of funerals.

And for 13-year-old me, who was beginning to transition from straight-up 1300 KYNO AM into the trickier waters of Rock 96 FM (or even – gulp! – KFIG 101 FM), it was a key text. Cos “(Don’t Fear) The Reaper” worked beautifully in both contexts.

On my beloved mono AM radio, the 45 was all about that insanely hypnotic endlessly circling riff, and the heavenly choir of Buck Dharmas singing the call-and-response chorus. And of course the “La-la-la-la-las.”

On the FM (in stereo) radio, the album version revealed the hidden depths of that insanely catchy riff, and also, in the middle of the song, there was this whole other section, with a weird guitar solo over crashing guitars! And of course, “oh, that percussion sound is a cowbell.”

Said cowbell, of course, was the basis for a classic Saturday Night Live sketch that both reinforced the how popular the song was – guesing the song itself was the inspiration for the sketch – but maybe made it into a bit of a joke as well. Either way, after 40 years of constant rotation “(Don’t Fear) The Reaper”  probably feels tired or a cliche, but I doubt I could ever stop loving it.