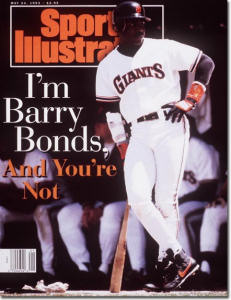 Let’s get a few things out of the way first: Barry Bonds is an asshole. Barry Bonds probably took some kind of steroids that are undetectable by any current tests.

And I don’t give a shit about either one of those things.

Do you wonder what the hell fans of the San Francisco Giants are thinking of by still supporting Bonds after all of this? Are we stupid? Are we blind? Didn’t we read Game of Shadows? Nope. Nope. And yes. And one of the biggest outrages of this whole mess is how those two guys were facing jail time for not revealing their sources.

I can’t speak for any other Giants fans, but I made my peace with Bonds using steroids back before even Game of Shadows says he even thought of using them. I made my peace with performance-enhancing drugs when I — and you, and you, and yes, even you — breathlessly watched Mark McGwire and Sammy Sosa battle each other on their way to totally obliterating Roger Maris’ record.

There wasn’t a baseball fan alive who watched how McGwire wielded that toothpick-sized bat — has anything ever looked smaller than a baseball bat in Mark McGwire’s hands? — and didn’t wonder in the back of their minds if something unnatural was going on.

But we didn’t care. We loved it. You know why? Because it was fucking AWESOME!! That’s why. It wasn’t just chicks who dug the long ball, it was everyone. It seemed like the entire nation came to a halt every time one of those two guys were at bat that fall. I’ve been a Baseball fan for my entire life — deep enough to know that “Dr. Strangeglove” was the nickname for Dick Stuart — and I don’t remember anything (that didn’t involve the Giants) that has ever been more exciting.

When were you when Mark McGwire broke that record? Rox and I were in a pub in San Francisco with Matt Brown, having a hamburger just prior to going to see a Wilco show. When Big Mac hit 62, the whole place erupted.

My take is this: if I wasn’t morally offended by the juicing in the late 1990s, then I have no right to be morally offended now. I’ve been a Baseball fan for long enough to know that there was no pretty flowers and frolicking pink unicorns halcyon era — unless you count the No Blacks Allowed Era, The Greenies Era, The Cocaine Era, or The Let’s Go On Strike Every Other Year Era as your Baseball Fiddler’s Greens.

Me, I figure that our sports mirror our society, and currently, our society tosses huge amount of mind and body-altering chemicals in to each and every one of us every single day. So asking the people who ask their bodies every single day to perform feats that the rest of us can’t even fathom to ignore that is, well, crazy.

Which is why as far as role models go, ha! If there is anything that is a moral certainty about sports, it is this: athletes will do anything — anything — to get an edge. Aways have. Always will.

Maybe that’s overly cynical — maybe Ball Four and that first Wilt Chamberlain autobiography warped me forever — or maybe it’s my libertarian views on drugs in general. but I just could never work up a head of steam about the whole thing.

Not even if the juicers are total and utter assholes who have (allegedly) used steroids to hit and pitch balls in their 40s in the same way they did when they were in their 30s. Not even if huge numbers used them. Which, if you’ve ever looked at one of those fuzzy ESPN Classic games from the 1970s and saw how skinny the athletes were then compared to how big they are now, you have to come to some conclusions about why.

Part of it, of course, is the rise of the 365-day athlete: the premier guys in every sport have enough money to not have to do anything else, so they work out like maniacs. And the other part of it is the rise of sports nutrition: a deeper understanding of what makes human bodies that already have an unfair advantage against 99% of the rest of us get just that little modicum of advantage over the other 1%.

Over time, the line as to what these people will do to get an advantage fuzzes. It almost has to.

Which brings me back to Bonds. By 1997 he was already my favorite player ever. I was too young to really appreciate Willie Mays, and moving to the Bay Area in 1994 and being immersed in the Giants day in and day out made me fall in love with how dangerous Bonds was on the basepaths, how great of an outfielder he was, and most of all, what a motherfucking danger he was every single time he stepped into the batter’s box. From the mid-90s on, I’ve watched (or listened to) hundreds, maybe even thousands, of his at-bats.

Why? Because if he wasn’t the smartest hitter ever, he could have joined Tony Gwynn as a teacher’s aide in Ted Williams’ seminar. That’s one of the ironies of the caricature of Barry as the Incredible Bulk — it implies that he deeply understood how to hit a baseball. You know, that little thing: the thing that Johnny Estalella, a second-string catcher with arms so huge that he could have used McGwire for his bat, could never figure out how to do.

That’s what I grew to love: his plate discipline; the way he would catalog a strike or a foul ball for later use; and the way he would fully uncoil on a pitch when he got one to hit. Wham! “He hits it high . . . hits it deep . . . OUTTA HERE!”, Of course, I didn’t like the fact that he never ran out easy ground balls; but that was a small price to pay for watching him at bat. It was like watching Jerry Rice catch a ball or Tiger Woods tee off or Michael Jordan one-on-one. Just the best doing what he did best.

And I don’t care if my favorite athletes (or writers)(or musicians)(or directors) are terrible people in the real world. I care about what they produce.

Of course in the case of Bonds, his production has diminished since he hit 40 (just like nearly every athlete ever except for Roger Clemens and Gordie Howe), and this is now, and I gotta admit that the pleasure has diminished.

I’m not sure why, exactly. Maybe it’s because I’ve been away from the Bay Area for six years and therefore, I can’t immerse myself in the Giants every summer. Maybe it’s because the Giants suck total ass right now. But it’s most likely because Barry himself has diminished. I still watch every at-bat that I can (for the past decade, the most hated phrase that comes out of my mouth at home has got to be “Barry’s coming up”), but it isn’t as much fun. It might just be that each at-bat these days ends in either a ground out or an intentional walk, so the possibilities have narrowed.

But I’ve never stopped rooting for him, and the guess here is that 50 years from now, he will be remembered as the greatest player of either the Steroids Era or The Beginning of the Post-Modern Era.

As far as the asterisk goes: Ford Frick was wrong for doing it to Roger Maris and it’s been a bad idea ever since. You can’t add an asterisk to Bonds record or throw out his stats or anything like that, because every single pitch thrown to Barry Bonds doesn’t just affect his statistics — it affects the stats of every single player on both teams in all of those games. Let me know when you’ve worked out how to do that and only affect the steroid guys.

And to those of you who feel like he shouldn’t own the record because he’s been such a dickhead over the years, and Henry Aaron is a true gentleman who somehow deserves to hold the record because he’s such an honorable, decent person, that argument seems so beyond the pale to me that I don’t even know how to address it. But no. That ain’t how sports statistics work.

Aaron has held the record for over 30 years, and it hasn’t diminished Babe Ruth. And when A-Rod or Pujols hold the record 10-15 years from now, it won’t diminish Barry. Baseball greatness isn’t a zero-sum game, and besides, Willie Mays is the greatest player ever, anyways.

Finally, watching the games at Dodger Stadium on TV this week, one thing struck me: it’s really hard to boo and chant when you’re busy taking photographs, isn’t it?