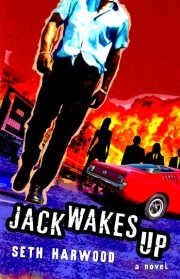 For novelist Seth Harwood the path from the Iowa Writers Workshop to the New York Times Book Review runs straight through the world of digital media.

While honing his writing skills in more traditional literary venues, Seth struggled to find success. It was only after he began serializing his novel as a podcast that Seth found an audience.

Seth is part of a new breed of authors who have embraced new media as a tool to reinvigorate the novel in an era when consumers are awash in a sea of digital entertainment options. Others, including Scott Sigler and J.C. Hutchins have taken a similar routes, proving that Seth’s podcasting success is no fluke.

Seth’s debut novel Jack Wakes Up is released today. Seth took time out from his book launch schedule to answer a few questions about Jack Wakes Up, podcasting, and the impact that new media has had on his approach to writing.

KB: For our readers who haven’t yet discovered your podcast, can you tell us a bit about Jack Wakes Up?

SH: Jack Wakes Up is “an action movie between two covers!” It’s what happens when Jack Palms, a one-hit-wonder action movie star hits the streets of SF to help a friend to make one big drug deal that’s supposed to set them up for life! But when people start turning up dead… Jack finds he has a lot on his hands.

His biggest problem though: he’s actually starting to enjoy himself!

KB: You’ve had great success podcasting your novels, what’s the secret to building such a devoted following?

SH: I’ve been really fortunate that the podcasting community has such great people in it. Everyone seems willing to play each others’ promos and help to spread the word about each others’ work.

In addition to that, a big part of the secret is consistency. Just as you know with your blog, when you keep posting quality material, more and more people will find you; the word of mouth builds. It’s like that with my podcast: I put out 20 episodes of Jack Wakes Up in twenty weeks and by the end, a lot more people were listening than at the start. After a while, when they keep seeing your episodes pop up, people start to wonder, what’s going on here? But that wasn’t the end of it. I’ve been putting out content more or less consistently for three years now: three separate Jack Palms novels (Jack Wakes Up and two sequels) as well as two story collections, promotional episodes, and a prequel novel set twenty years before Jack Wakes Up that I’ve just finished. It’s about putting out the good content, but being consistent and even constant about getting it out there for people to hear and read!

KB: Given the uncommon path you’ve taken to publishing your first novel, how do you anticipate new media might shape your future as a novelist?

SH: I think I’ll always be podcasting my books as I go forward as a writer. I’ve established a relationship with my audience such that they can expect to get something free from me and I want to keep that up. It’s not a one-way street: the support, assistance and encouragement that I get from them is invaluable. It’s buoyed me to accomplish things I’d never have thought possible (in sheer output and so much more)!

I also think I’ll start to show other writers how to do what I’ve done more and more. Scott Sigler are teaching our Author Boot Camp class and this fall we’ll be presenting it at a Writers’ Digest conference in New York, Stanford, and a few other places I can’t even talk about yet. I’m really excited about that because I know how hard it can be to feel alone as a writer. I love talking about how I built my audience and seeing fellow writers’ faces just light up! Plus, I just love teaching. That part of it feels very natural to me.

I also want to keep pushing toward any new innovations in technology I can find. I want to make sure my books are available on as many platforms as possible. Whatever way a given reader decides to consume books (on an iPhone, a Kindle, in paperback, through audio on a car trip, whatever you can imagine), I want to make sure Jack Wakes Up and anything I write is an option for him or her.

KB: We hear a lot of talk about “thinking beyond the book” in the digital age. Jack Palms feels like a multi-media entertainment franchise in the making. How far beyond the book are you willing to take Jack? Movies? Video games? Theme parks?

SH: So many people have read or listened to Jack Wakes Up and rushed to tell me that it has to be a movie. I would absolutely love to see that happen and am doing my best to try to make that dream come to life. At the same time, I think some wonderful things are happening in TV shows these days and I love what Showtime has done with Jeff Lindsay’s Dexter books. If Jack could find a life like that I’d be thrilled. In video games, I’m seeing some interesting developments these days in terms of a concentration on plots and the writing in many of the best games. I’d really like to get involved in that industry as well. Writing for video games and comic books is something I’ve been thinking about for a while.

Basically, this is all just an amazing ride for me at this point. I’ve had a great time creating the three Jack Palms novels and putting them out as podcasts and whatever medium they can get into I’d be ready to do. Maybe that’s a part of my take on new media and my future as a novelist: having come this far by accepting new formats and trying anything that I’ve come across, I’m very ready to continue trying new things. I see only upsides from them. The more platforms Jack Palms can get onto, the better!

But I’m not so sure about a theme park. Not in real life yet, anyway. Maybe in Second Life?

KB: Any thoughts on the Kindle or eBooks in general?

SH: I love ’em. The fact is, we’re at a place now where the supply of books and book options has flooded the market (just like they were saying at the panel we attended in LA). Readers are the ones with a world of choices right now and they’re going to decide what books they want, how they want to consume them, and which gadgets they’re going to buy and use to read. I love paper books because I’m crazy about taking them to bed with me to read, but the more we can do this with eBooks, the better they get. The fact is, my best strategy as an author is to just get my book(s) onto as many platforms as I possibly can. Whatever way a reader wants to read or listen to a book, it’s my job to make sure Jack Wakes Up is an option for them–something they can find easily and try affordably in that space!

To learn more about Seth Harwood and Jack Wakes Up:

Seth provides a quick behind the scenes glimpse into the making of his podcast: