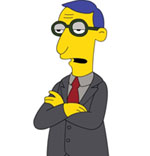 Sometimes even companies we love become too big for their britches. I guess that they get so used to having control of their environment and/or their market, they decide that they want to overreach and try to control things that they have no business trying to control.

The latest company guilty of trying to overreach: Google.

All they want to do now is control the English Language. Hey, let us know how that works out.

Friday, in the official Google Blog, there was an entry bemoaning the fact that their name has essentially become a verb meaning “to search the internet for information” regardless of how you do it. In other words, what Yahoo! failed to get with their their multi-million dollar “Do You Yahoo!?!” ad campaign, Google got for completely free, and yet, it isn’t good enough.

A trademark is a word, name, symbol or device that identifies a particular company’s products or services. Google is a trademark identifying Google Inc. and our search technology and services. While we’re pleased that so many people think of us when they think of searching the web, let’s face it, we do have a brand to protect, so we’d like to make clear that you should please only use “Google” when you’re actually referring to Google Inc. and our services.

Essentially, it boils down to this: Google’s trademark laywers want you to only use the word “google” when you are using Google to google something. If you use Yahoo! or A9 or MSN to google, say, the phrase — “bite me, Google”, you must use the word “search.”

Or in other words: Bow down to Google, English Language, BOW DOWN!! You must use words in only the matter that their trademark lawyers proscribe!!

And this, of course, from the people who punningly stole repurposed their name from an obscure (but pretty cool) math term in the first place. Do you think that the nine-year-old kid who invented that word back in the 1930s would have wanted it to forever be confused with an internet start-up? No!! And even if he was alive when Google started, he probably wouldn’t have whinged about the usage in this manner.

Of course, the second I wrote that, I googled “Google and Googol” on Yahoo! and came up with articles saying that the man’s family were thinking about suing. But that they’d settle for being in on the IPO. Hey, me too!!

Of course, at the end of the day, even the lawyers know language doesn’t work that way, it’s an organic living breathing organism out of anybody’s control, even Google’s. And they can’t sue everybody who uses their name in vain, can they? Well, maybe they can, but they probably won’t. Because it would cost at least a googol dollars, and not even Google has that. Yet.