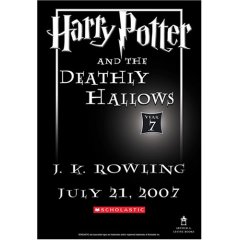 Is there any possible way to live in this world and not be spoiled? Look, I’m going to start reading it the second I get it, of course, but it’s not like a TV show or a movie where you know the end in a couple of hours: these books are notoriously long and my free time is lamentably short. So what’s the grace period for spoilers on the ending of a book? A week? A month? A year? Never? (Please don’t tell me how

And will it even matter by the time the book comes out? After all, there are at least a few people who already know. And that circle will inevitably widen, person by person. How can it not?

I guess that I can try to avoid some spoilers by avoiding the reviews. Perhaps. Will there be any advance review copies? It’s not like they need them to sell books. But what about an inadvertent headline? Or a reference in another media entirely? What happens if I get spoiled by, say, Stephen Colbert, because he’s jealous that the Tek Jansen series hasn’t sold nearly as well.

So in one sense, the coolest thing that JK could do is start off the final book with: “Harry Potter clutched his chest; his arm grew numb. His last thought was that he’d never to be able to face Voldemort, much less defeat him. Who knew that his heart was so weak?”

Still, killing him off on like the first page would relieve everyone of the burden of when to spoil. I’m just sure that I will be spoiled, and will feel extremely lucky if I’m not. I guess that I’d better just get used to it, or somehow schedule a total media blackout between now and, say, the end of August. Which ain’t gonna happen.

So I’d better get used to the fact that I’ll probably be spoiled. Which sucks. More so than if Harry actually died. In fact, if it’s done well, I’ll be fine either way it goes.

Hermione, on the other hand, is a different story. If she dies, I’ll be pissed.