I don’t exactly remember when I first started noticing the annoying Celebrity shots while watching sporting events, but my guess is that like so many annoying sports broadcasting trends, it started with the FOX World Series broadcasts. You know, the ones where they treat the actual Baseball part of the broadcast with the same grudging respect teenagers give their grandparents.

Because the World Series happens during the beginning of the Fall TV season, FOX always uses it as a method for hyping upcoming shows, and so not only are we treated to thousands of promos for those shows during every commercial break (just as ABC is currently doing for their doomed Life on Mars remake), we are also treated to live shots of the actual actors of those shows at the games — always treated as if they just happened to be lifelong fans of the teams in the Series, and taking seats from actual fans of those teams in order to whore out their latest project.

It’s actually a pretty good indicator of which shows FOX thinks will break out to their audience, so the Save Dollhouse! people better cross their fingers for loads of shots of Eliza Dushku and Tahmoh Penikett, the way we’ve been previously subjected to Hugh Laurie — no doubt a lifelong Colorado Rockies fan — and the guys in Fastlane, whose names I can no longer remember or even bother to IMDB.

Naturally, as awful the marketing department of FOX is, they don’t even come close to the evil geniuses who market for Disney, for whom I have such a life-long antipathy that when I brought the subject up last night during the actual telecast, Rox went “Disney marketing department blah blah blah,” before I could even get a full sentence out. Luckily, you fine people haven’t been around me for the past two decades, so I’ll just complain this way.

The reasons for that antipathy go back to how they marketed their videos back when I managed the Video Zone in Clovis in the late 1980s. It’s a policy of creating demand by artificially reducing the supply, which meant that they released their classic movies on VHS (and Beta!) for approximately 15 minutes, after which they seemingly made every single copy on Earth self-destruct.

The upshot of Disney’s policy was that in the late 80s and early 90s, any retailer that either sold or rented Disney Videos (because even the rental copies tended to be disappear) to the general public spent all their time explaining why the 1001 copies of 101 Dalmatians that were for sale last month when the are now gone, and why the customer is shit out of luck because it won’t be released again in any format until 2008. 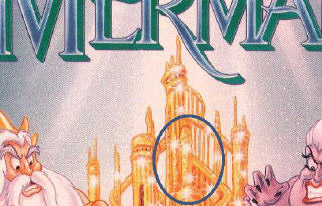 It’s a neat marketing trick, but that the customers didn’t really understand all that much, and, naturally always blamed the retailers (“surely, you have one more copy in the back”) for the artificial shortage created by Disney. Which was why I took special pleasure when one of their disgruntled artists snuck a huge penis onto the VHS box cover of the Little Mermaid, still one of the all-time greatest acts of entertainment industry rebellion.

Unless, of course, it was accidental, as Snopes claims. Either way, it was funny, and there was definitely enough egg (as the kids called it back then) on Disney’s face for the box cover to be castrated for future pressings.

Right. Where was I, again? Oh right, the ritual Running of the Celebrities, because of which, I just realized that perhaps the NBA Finals Conspiracy people have it totally wrong. I mean, if you’re ABC, and you’re working with the National Basketball Association hand-in-hand to choreograph every single shot so as to get maximum viewerage for your network, why wouldn’t you want the San Antonio Spurs in the NBA Finals so that you can show Desperate Housewives star Eva Longoria Parker every 35 seconds?

They are, however, part of Disney, as is Pixar, which is why Wall-E gets highlighted in the same break as Jack Nicholson and Dustin Hoffman.

I haven’t really been paying that much attention to the promotion for Wall-E, just assuming that if it was from Pixar, it would be worth my while. Oh, and thinking that Wall-E himself kinda looked like a squat Number 5 from Short Circuit.

But here’s the thing: showing Wall-E at the NBA Finals is 100% a spoiler for the movie Wall-E. Why? Because it occurs after the events of the movie on Wall-E’s personal timeline.

Hey ABC and Disney! Did you think we wouldn’t notice this fatal flaw in your relentless pursuit of synergistic perfection? So arrogant.

Because it’s not just me who got spoiled, but the entire world-wide audience for the NBA Finals. An audience which might have wanted to go see Wall-E, but might just not bother now that they know that he’s going to turn out OK. And since Wall-E — who was probably railroaded into making the appearance in the first place — no doubt gets some of the back end, that’s going to affect his cut.

Just wait until the rest of the Robots — who I’m sure were anxiously waiting for the Opening Week numbers to prove that one of their kind could carry a movie — hear about this. They’re going to be so pissed that they’ll move the Revolution up a couple of decades.

So on behalf of not just myself, but the entire world I just want to say this to the marketing people at Disney: “Thanks a lot. Not just for spoiling Wall-E, but putting the entire fate of humanity at risk!”

Luckily, there’s a special circle in Hell reserved just for them.