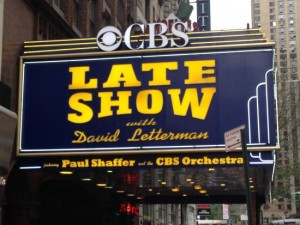 Why would I? For much of the 1980s, his NBC show was my absolute and utter favorite thing in all of the pop culture world. I loved that show more than R.E.M. or The Replacements or Bloom County or This is Spinal Tap. I loved Dave more than Raising Arizona or Lord of The Rings or Bob Dylan.


When I first discovered David Letterman — hell, it could have been the R.E.M. appearance — it was like a door snapped open in my head. I’d already been watching late-night TV on the weekends: Saturday Night Live, Friday Night Videos, SCTV, and — hell, even Fridays. But that was weekends. Weeknights still belonged to Johnny Carson who was– you know — for my parents. Dave was for smart-ass, cynical college students, and I fell head over heels for the combination of irony, wit and utter silliness that he displayed on every single broadcast of Late Night With David Letterman.

So, for years and years — until the end of his NBC run — I taped Dave every single night. (I almost never watched him live, because if I was awake at 12:30 — or at 1:00 because our local NBC affiliate ran something called Carson’s Comedy Classics at 12:30 for years — I had other things to do.)

Throughout all of the utter tumult of my 20s, there was only one thing I could absolutely count on: David Letterman would make me laugh. That’s never really changed, though as the culty weirdness Late Night gave way to the more broad The Late Show, I stopped taping him every night, but of course I’ve always watched when he had someone interesting on. And 30 years later, as his innovations have become part of the lexicon, part of the operators manual for late night TV, none of the things that felt so groundbreaking in the mid-80s play that way anymore. That’s as it should be.

So when Rox and I decided to spend some unexpected money to go to New York City for our anniversary in 2004, I was really excited that I was able to get tickets — three months in advance — for a taping of The Late Show, figuring that it would be one of the highlights of our trip.

I’d seen Dave live once before. Me, a girlfriend, and my brother John drove down to Universal City in early 1990 to see the taping of the Eighth Anniversary Special of Late Night and absolutely nothing bad happened. Well, Tom Petty & The Heartbreakers gave the least energetic performance I’d ever seen them give, but other than that, it was a fine trip.

This wasn’t. Our second day in Manhattan, I ate something that disagreed with me and I got food poisoning. I’ll spare you the details, but it hit me during a late-night subway ride from Brooklyn to mid-town, and all I’ll say is that for about a half-hour, I was that guy who you didn’t want to sit next to on the subway. The guy who is shaking so bad that he clearly struggling with something that’s at best, some kind of weird drug overdose. Of course, poor Rox had to sit with me the whole way (and run behind me through mid-town Manhattan as I raced to our hotel room) and deal with everything.

This was two nights before the taping we were scheduled to go to, so clearly I’d be OK by then, right?

That was the hope, especially because the day before the taping we found a window to visit the Empire State Building with nothing bad happening. So we made the decision to go to the Letterman taping. I mean, surely they have bathrooms in the Ed Sullivan theater, right?

What I didn’t understand was how incredibly structured the audience prep for a taping of The Late Show With David Letterman was. In 1990, we just showed up prior to the show starting, went to our seats and watched the show. In 2004, not so much. The audience would all line up in one place for awhile — secretly making fun of the poor folks who were only the standby audience — then they’d take us to another place where we would line up, and all the while they’re doing everything they can to pump us up pump us up pump us up. I remember that at one point, they had us walking from across the street into The Ed Sullivan Theatre while clapping our hands.

It was very weird, and very stagey. And as someone who was sick, that kind of structure wasn’t good. Of course, like you do when you’re sick, I figured that every time I ducked into the restroom was going to be the last time. That I was going to be magically finished with being sick. And for awhile I was.

Er, until five minutes before the taping began, during the warm-up comic, when I was seized with the absolute and utter need to go. Right now. So I said to the nearest usher, “excuse me, I need to go to the rest room.” Immediately, they hustled me out of my seat, hustled Rox with me, and led us through a door. Not into the hallway where the rest rooms were, but into an alleyway behind the Ed Sullivan Theater.

Oh, and I still had to find a restroom, stat!. Luckily, sploshed across the street to a donut place, and Rox had a cup of coffee while I apologized for causing us to miss the taping. Of course they had to throw us out! I was a potential disturbance to a taping of a network TV show! What has always amazed me is the ruthless efficiency with which we were tossed. And to the people from the standby audience who suddenly ended up with our seats and got to see Dave interview John Goodman and see Tom Waits play a song, you’re welcome!

It was folly to even try, but the guy inside of me who loved Dave so much for so long would have been incredibly sad had we not made the attempt.

I look at it this way: while thousands and thousands (millions?) of people have watched a Letterman taping over the last 30 years, I’m guessing only a handful have ever been thrown out of one. And I just might be the only person who has done both!!