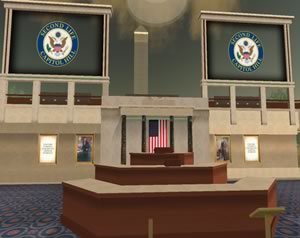 There was a time, not so long ago, when money was the only ingredient any candidate or political group needed to disseminate a political message to the masses.

Billions of dollars have been spent producing and distributing political advertisements. To this day, pundits and analysts gauge a candidate’s prospects for competing in an election by the amount of money that candidates can raise to buy media time.

But all of this is changing rapidly, thanks to social media. The economics of campaigning are being turned upside down by services like YouTube. We’re entering a new era of grassroots politics where average citizens can produce and distribute political messages that reach a global audience instantaneously, at almost no cost. These new distribution channels are fundamentally altering the balance of media power.

At the same time, the widespread availability of these new tools raises some interesting questions about disclosure and transparency. For example, we know the Obama Girl loves Barack, but we don’t have a clue who she is or what her motives are. From one perspective, she’s helping the candidate gain exposure with a young demographic. From another perspective, she might be harming the candidate among voters who see the video as frivolous — depending on who produced the video, that may be the goal.

On television, viewers have some idea of who produced any given advertisement. The rules regarding traditional political ads require financial disclosure and a statement by the candidate indicating they endorse the message.

Since I’m not a lawyer or expert on federal election laws, I set out to seek advice from an experienced professional. As a result, I spent much of the last two weeks calling and emailing attorneys, trying to determine what rules apply to politically active netizens.

My search led me to Adam C. Bonin, a Philadelphia-based attorney who participated in the FEC regulatory hearings, which eventually led to the passage of new laws governing online political activities. During those hearings,  Adam represented Markos Moulitsas, Matt Stoller, Atrios, and other high-profile political bloggers. So if anyone knows about Federal Election laws as they apply to the Internet, it’s Adam.

Adam explained that, as of March 2006, the FEC had made broad exemptions for political speech online. The result is that individuals are free to use a range of social media tools to organize grassroots campaign efforts with almost no oversight, disclosure, or reporting requirements.

At first glance, these rules seem odd because new media has a much broader reach than traditional media, but Adam explains the rules are pretty logical in the context of the role that Federal Election laws play in the US political process,

“Campaign finance law is supposed to regulate money. That’s the whole point. We want to stem the ability of money to influence how legislators operate.

The nice thing about this technology is that it allows people to have influence over the electoral process without spending large sums of money. It allows people to get together across geographic distances for common goals, aggregate small dollar donations, and create political change that way.

The technology really allows what the law by itself could not, which is a leveling of the playing field. It really is accomplishing what the thrust of campaign finance law is. It is negating the ability of large sums of money to dominate the process.”

The new rules are neatly summarized and clearly explained by The Net Democracy Guide — a website run by the Center for Democracy and Technology.

These new regulations allow individuals or groups to freely engage in “uncompensated internet activities,” which are exempt from all campaign finance regulations. Adam explains that, during the FEC hearings, he and his team urged the Commission to think more broadly and craft laws that covered a wide range of online activities, not just blogging.

The good news for anyone using the Internet to participate in the political process is that nearly all activities are exempt from FEC regulations. However, while the regulations cover most political activities that occur online, they don’t address all of the questions that I’ve raised. For example, the new rules don’t address the issue of foreign involvement in US campaigns.

I asked Adam a few hypothetical questions based on some of the political activity I’ve witnessed in Second Life. For example, what if a virtual campaign exceeds the “nominal” fees described in the new regulations? And what about the involvement of foreign nationals in these campaigns? Are they entitled to the same exemptions? And if not, what limitations apply?

At one point, Adam commented that my questions were making him dizzy. Unfortunately, he wasn’t the only person who told me that this past week.

I walked Adam through several scenarios. While these scenarios are specific to activities in Second Life, the issues addressed in each of these situations are relevant to grassroots campaign efforts on any other social media platform.

Groups campaigning on behalf of specific candidates in Second Life:

I described the activities of the various groups campaigning on behalf of specific candidates in the virtual world. There are SL groups representing Clinton, Obama, Edwards, Gravel, and Paul to date. Only Gravel’s group is authorized by the official campaign. The other groups are the work of volunteers who share the common goal of seeing their candidate of choice elected President of the United States.

Generally, the activities of these groups fall under the broad exemptions specified in the new FEC regulations. The unofficial groups can coordinate their efforts with the official campaigns and disseminate official campaign materials.

I also presented Adam with a few scenarios related to the costs involved in hosting virtual campaign headquarters in Second Life. For example, while it’s possible to host a virtual building on the cheap in Second Life, spending large sums of money on land and the related land use fee is also possible. Adam indicated that monthly payments in the $20 to $30 range would probably be considered reasonable, but monthly fees costing hundreds of dollars would not be nominal.

After evaluating the campaign locations of the virtual groups campaigning for John Edwards, Ron Paul, and Barack Obama, I determined that the land value and corresponding monthly land-use fees were likely within the range of what the FEC would consider a nominal expense. The Gravel group, being part of the official campaign, are allowed to spend whatever they like but are subject to the same regulations the official campaign would be subject to in real life.

The Clinton group’s headquarters seems to be the exception. The group’s building is on a dedicated island, and the size of the land is much larger than any of the other grassroots groups.

Second Life islands are not cheap, and the corresponding land use fees are also considerable. For example, Linden Lab currently sells islands for approximately $1,675 US, and the monthly land use fee for an island is $295 US.

After presenting Adam with this scenario, he indicated that the amounts in question would probably not be considered nominal and would likely elevate the display to a different level, requiring full disclosure and disclaimers. For example, in Second Life, full disclosure could be presented in the form of a prominently placed sign, identifying the person who paid for the build (by real-world name) and listing the permanent street address, telephone number, or web address of that person.

After further research, I determined that Clinton Island is part of a “low-performance” region where entire islands are available at a significant discount. My research indicates the cost of the island was probably in the range of $400 US, and the monthly land use fees are $80 US. While those amounts are more than the other grassroots groups are spending, they could fall within the nominal range.

Since the FEC regulations don’t explicitly indicate what amounts are considered nominal, this is all open to interpretation. The point that anyone involved in Second Life campaigns should take away from this is that, while these activities are protected by law, there is a point at which some lines can be crossed.

For example, if a group were to come into Second Life and build a custom island in the shape of John McCain’s head, then set up a grassroots campaign headquarters there, the related expenses would likely go beyond what could be considered an “uncompensated internet activity.”

Foreign involvement in US elections:

Given that US residents are a minority in Second Life, we can expect that there might be a considerable number of foreign nationals participating in these groups. This involvement is a touchy subject in Second Life, depending on who you talk to.

I spoke with at least one group steering committee member who believed that foreign involvement was OK as long as the group was unofficial. The truth is that international participation in US campaigns is not a problem, as long as the foreign national is acting voluntarily.

Foreign nationals can even participate in fundraising efforts on behalf of US candidates. What they can’t do is receive compensation for their activities or contribute anything of value. Foreign nationals can also serve as vendors, but they must be paid their full fees. Any discounts are considered a contribution.

I’m aware of two specific instances in Second Life where there may be legitimate concerns regarding the involvement of foreign nationals in US political groups:

See the FEC website for a more detailed discussion on the laws regulating the activities of foreign nationals in US elections.

The Second Choices blog raised the issue of corporate branding at the first Gravel location. I took this issue up with Adam, and he believed that it likely would not be a problem as long as Cezary’s “aHead Corporation” was not a real corporation. I have to admit that I haven’t delved into the corporate structure of Cezary’s business. Call me a slacker, but this story is complicated enough as it is, and besides, the first Gravel location has already been abandoned.

As I’ve noted, most of the political groups in Second Life seem to be operating well within the boundaries of the law. Considering how much freedom the new FEC regulations have given individuals and grassroots organizations, that’s not hard to do.

In the case of the Clinton group, it does appear that it will need to make some effort to address the donation of land by a foreign national. If that’s already been done, the group should make an effort to be more transparent about its activities.

For everyone else, my best advice would be to keep your builds reasonably sized and don’t take anything of value from non-US citizens.

Until next time, I’m Ronin Kurosawa, and I approved this message.