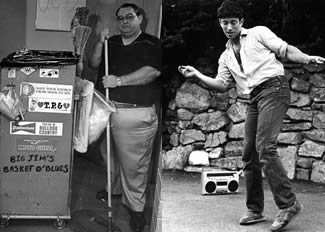 This special Leap Day podcast features another vintage interview from the Medialoper vaults. Recorded in 1987, this is one of the more unusual Jonathan Richman interviews you will ever hear.

How unusal? Well, I think it’s safe to say that this is probably the first and only time that Jonathan Richman was ever interviewed by a janitor. Of course, these days we call them maintenance engineers, but back in the Reagan era things weren’t quite so politically correct.

The janitor in question is one Big Jim Hunsicker. Big Jim was head custodian in the Speech Arts building at CSU Fresno — home of KFSR FM.

Back in the early 80’s the college radio revolution was just taking off, and running a station that played only your favorite bands was every music geek’s dream come true.

There was just one problem. While we were happy to have complete control over our little slice of the airwaves, we couldn’t always be relied on to wake up at 6 am to turn the transmitter on. Fortunately, Big Jim was watching over us. Whenever the morning DJ would oversleep (which happened A LOT), Big Jim would put down his broom, turn on the transmitter, read the official station sign-on, and cue up Herbie Hancock’s Watermelon Man (that was the official Big Jim theme song).

Over time Big Jim became something of a Fresno folk hero. Then, sadly, the school administration caught on and barred Jim from helping out. While the administration may have been punishing the slackers who ran the station, their decision also had the unanticipated consequence of punishing everyone who’d set their clock radios to KFSR (including, no doubt, a few of those morning DJ’s who were always over sleeping).

With Big Jim effectively banned from radio, it was only natural that he would move on to television. In a pre-YouTube era, cable access was the thing to do. And so, former KFSR Program Director Brad “the Slam” Rogers and I proceeded to plot The Big Jim Show. This Jonathan Richman interview is all that remains of that show.

Big Jim is no longer with us (that’s a sensitive way of saying he’s gone on to the great broom closet in the sky).