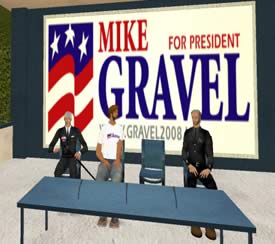 It’s no secret that social media will significantly impact the 2008 US presidential race. The leading candidates are already using every social network to reach as many voters as possible. You can be Hillary Clinton’s friend on MySpace, follow John Edwards’s personal goals on 43Things, and have Barack Obama’s tweets delivered directly to your mobile phone.

Collectively the candidates are leaving almost no new media stone unturned. But until last week, none of the campaigns had an authorized presence in a virtual world. That all changed on Friday when Mike Gravel’s campaign unveiled its new headquarters in Second Life.

Following a spirited performance in the Democratic debates and a whirlwind media tour afterward, Gravel is shaping to be the ultimate maverick candidate. By comparison, former maverick John McCain looks like an absolute impostor.

Some think that Gravel’s arrival in Second Life is a political milestone and a harbinger of things to come. At the opening of Gravel’s HQ, there was speculation amongst the crowd that it’s only a matter of time before the other campaigns begin authorizing in-world headquarters. While that might be possible, I doubt that the Obama and Clinton campaigns are looking to Gravel for clues on their online campaign activities.

More than anything, Gravel’s Second Life presence is an indication that his people understand that third-tier candidates need to be more aggressive in their use of new media if they’re going to have any hope of competing.

“voters trying to sort out their presidential choices aren’t helped by debates cluttered with the likes of Mike Gravel.”

“The arrogance in some parts of the Fourth Estate knows no bounds! My God, what we need is more people cluttering the stage!”

Statements like that are rapidly making Mike Gravel the candidate of the Digg-set.

With each new slight from mainstream media, Gravel gets more mileage out of the blogosphere and social news sites. After the candidate was un-invited to the CNN debate and removed from an MSNBC poll, traffic to his campaign website surged. The more mainstream media tries to silence Gravel, the more new media outlets champion him as a serious candidate.

The media may try to portray Gravel as part of the “left-wing fringe,” but in a world as weird as Second Life, he looks like an elder statesman. So is it any wonder that he gave the official stamp of approval to a guy named Astrophysicist McCallister and his other supporters in Second Life?

By Second Life standards, Friday’s grand opening was a tame event. A large-ish crowd turned out to tour the new facility designed by Cezary Fish. By just about any measure, the location can be considered a “nice build.” The new Gravel site is well suited to running an in-world campaign and can serve as a model for future campaign HQs (and even some existing HQs that can use an upgrade). There’s not a single mermaid or unicorn in sight!

Instead, the Gravel campaign chose to focus on the candidate’s message and his stance on a variety of issues. For example, Gravel is opposed to the war in Iraq, favors eliminating the federal income tax in favor of a national sales tax, and plans to create a new branch of government to empower American citizens to make and pass laws.

This last bit, known officially as The National Initiative For Democracy (NI4D), nearly derailed the grand opening ceremony when an animated (both literally and figuratively) political discussion broke out about the relative merits and risks of such a program.

NI4D is nothing short of revolutionary. And by revolutionary, I mean revolutionary in the way that scares people, not revolutionary like the Apple iPhone. Once you start reading the NI4D website (as several attendees did during the event), all sorts of interesting and complicated questions arise.

To his credit, Astro managed to reel in the crowd and put the whole event back on track while promising to schedule a special town hall to discuss the NI4D in-depth. Until then, here’s a process diagram that explains how the NI4D would work. That’s the future of American Democracy explained in one easy flow chart.

One side note, during the meeting, Astro revealed that Gravel created the NI4D by himself and has been managing the site for several years. So when Chris Matthews asked Gravel where he’d been for the past ten years, the candidate might just as well have answered “learning HTML.”

We’re told that a Gravel avatar is in the works, and the candidate will soon make an appearance in Second Life. Modeled on Gravel during his Senate days, the avatar will be 30 years younger, 15 pounds lighter, and will have quite a bit more hair than the 77-year-old candidate. Given those possibilities, it’s sort of surprising we aren’t seeing more candidates campaigning in the metaverse.