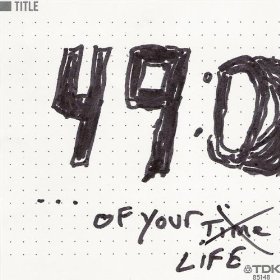 In a year where it has become almost de rigueur for artists to screw with the accepted music release model, Paul Westerberg has come up with yet another variation, for his download-only album 49:00, released today on Amazon..

Betcha didn’t even know that Paul Westerberg had anything new coming out, did you? Neither did I, until I happened to see an email from the Man Without Ties web site, alerting me that it was available for download.

It’s called 49:00, and it’s an entire album’s worth of new music for the low low price of 0.49 cents. But, as in all things Westerbergian, there’s a bit of a self-destructive twist.

That entire album’s worth of new music: it’s all contained in a single file. You download one single .mp3, which is 43:55 in length.

49:00 is the futuristic tale of how the Interplanetary Music Consortium has banned all artists from recording music anywhere but in the Saturn Recording Studio on Saturn, whereupon the music is locked down on their Quanto-Servers with a DRM algorithm that is virtually uncrackable because it uses Really Big Numbers.

In this way, Interplanetary Music Consortium controls all music and the price that people pay for that music. The cost of a single brainload has skyrocketed to nearly 100,000 paroctoids!

And at these exchange rates, who can afford that?

But we have to, because violation of the new musical order is punishable by death. So all musicians and music fans meekly comply, and the Interplanetary Music Consortium has power beyond belief, making them virtually unstoppable in their quest to control all of the 47 Galaxies.

That is all musicians, except for one — the semi-retired Grandpaboy — who has discovered the Last Cassette Recorder, and has used it to record 49:00 worth of music, the beauty and strength of which is powerful enough to take down the entire Consortium. If only he could somehow get people to hear it . . .

OK, I just made that up. But you gotta admit, it would be awesome!! No?

In reality, while 49:00 is a single file, it consists of several songs. Which means this: Paul Westerberg has figured out how to get people to listen to an actual album all the way through. There’s really no choice, especially since — as I write this — there doesn’t seem to be any actual song titles floating around. It’s all or nothing.

At first, it’s a bit overwhelming: with no real reference points like names and times, 49:00 comes across as just a jumble of songs, like you’re driving cross-country and stumbled across a radio station that’s playing some cool music you’ve never heard before, but the damn thing is fading in and out.

Because it’s not just full songs, it’s also song snippets. Then its two songs playing at the same time, and excerpts from cover versions that fade in and out, and then, suddenly, I’m in love, what’s that song?

No really, what’s that song?!?

It’s all a bit of a mess, really. But that’s OK, because it only costs forty-nine cents. In a strange way, Westerberg has used the internet to bootleg himself.

Because it’s such a mess, you might wonder who is going to listen to it more than once, and then you realize that because it’s a nice big digital file, what will eventually happen is that his fan base will come up with consensus names for all of the songs, and song snippets, and the time codes for everything.

And after that, it will be a snap for somebody to go into the file, break everything into individual files, and what started as a weird experiment will evolve into being the new Paul Westerberg album. I don’t know if that’s what he intended, but that’s what it will end up being.