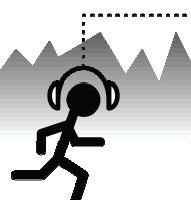 Medialoper, in conjunction with the ACLU and the Heritage Foundation, would like to make the following Public Service Announcement: Please don’t stop the Jogger.

Even if it’s 5:30 in the morning, and you are lost, it’s not a good practice or policy to stop the Jogger and yell seemingly random places, (“The church! The church!”), actions (“voting”) or street names (“Ruberta”) at the him.

There are quite a few reasons why you should stop anybody else other than the Jogger to get your directions:

It’s 5:30 in the morning, and not only is the Jogger barely awake, you can see that he is wearing headphones and therefore probably deep into listening to music, listening to the radio or questioning his life choices.

In fact, it’s a pretty good chance that while you might be lost physically, he is lost spiritually, and you just don’t want to mess with that.

The Jogger may be, in fact, miles from his actual home, in a strange neighborhood, and doesn’t know all of the street names surrounding him. All he cares about is being able to run away from his home, and eventually find his way back. While it’s about the destination for you, it’s all about the journey for the Jogger.

Which means, technically, the Jogger is probably lost physically as well.

Besides, does it look like the Jogger has a map? Yes, he does have an iPhone — which he carries in order to call an ambulance when the Jogger finally, inevitably gets run over by that lady in the red Saturn who likes to drive 80mph on Kenneth at 6:00AM every godsdammed day — but AT&Ts 3G service is soooo terrible in that neighborhood that it really doesn’t count.

He just hopes that when he does get run over, he doesn’t get the “Call Failed” graphic like he does sitting still on his own couch.

Finally, the longer he is stopped, the harder the restart. Tom Petty was wrong: the waiting isn’t the hardest part, it’s the restart. That’s why the Jogger gives you a glare when you ask him your garbled directions, and doesn’t come to a full stop while trying to answer you. Full stop = dead shark.

All of these reasons combine to create the following scenario: the Jogger is backing away from you while trying desperately to answer an totally unexpected question he couldn’t quite comprehend in the first place — running a quick brain search to see if maybe he remembers any street signs that match what he thinks you said — before he finally waves a hand in the general direction of behind you and says “I think it’s that way,” spins and runs off.

Is what you’re looking for actually that way? Probably not.

And that’s why you should never stop the Jogger.

This has been a Public Service Announcement from Medialoper, the 9/12 Project and PETA.