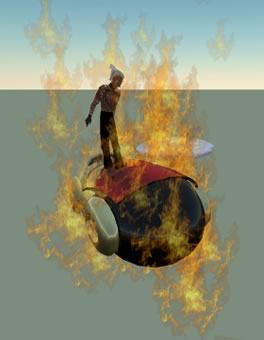 I was flying 600 meters above Janni when my submarine burst into flames.

I’d taken to the sky after the area around my (previously) remote compound was invaded by an army of Brazilian tourists and a small band of nudist Wiccans. Somehow they managed to block all water routes leading out of the area.

Fortunately, my submarine can fly. At least, it used to.

By now, you know that Second Life is a place where anything can happen. What you may not know is that it’s also a place where nothing ever really works the way it’s supposed to.

Ask any long-time resident, and they’ll tell you that Second Life is always broken. For the last couple of weeks, group chat — the primary tool that political campaigns use to organize in-world — has been busted. While Second Life has tremendous potential for political mobilization, it looks like a fragile toy right now.

Given that backdrop, it should come as no surprise that there hasn’t been any substantial campaign activity here since my last post. In the past couple of weeks, Mike Gravel supporters created a new group, and Ron Paul supporters opened a new HQ. The latter is significant because Paul is the first Republican candidate to have a presence in Second Life, and the former is surprising because Gravel claims to have been hiding under a rock for the last ten years.

Meanwhile, both parties have held real-life debates, and neither has acknowledged any campaigning in Second Life. It’s curious. If you’re going to use the medium to campaign for office, then get out there and do it!

I guess the virtual campaigns are playing it safe, trying to avoid the early missteps that received negative publicity, hoping they’ll eventually get the official stamp of approval from their respective candidates. In the meantime, this assignment has become damn boring (except for the nudist Wiccans).

In this first phase of the campaign, we’re seeing the work of an enthusiastic group of volunteers who have no official connection to the candidates. What the volunteers of the various Second Life campaigns are producing is part of a more significant movement called “voter-generated content.” This is what grassroots politics looks like in the 21st century.

So far, the campaigns are taking a (mostly) hands-off approach and are allowing voters to use the candidate’s names without interference. In a recent CBS News story, Obama spokeswoman Jen Psaki describes the campaign’s approach to dealing with modern political activism on the Internet:

“We’re running a different kind of campaign here. There are thousands of people, more, using the Internet to network and spread the campaign and people doing it on the ground, too, and we’re excited about these efforts,” Psaki said. The only regulation the campaign will try to put on using Obama logos or likeness would be if “anything comes across our plates that’s offensive or not aligned with what our priorities are, we’ll deal with that on a case-by case basis.”

So what happens when voter-generated content clashes with the campaign’s priorities? We’ve already seen one upstart video make waves on YouTube. While there was a brief effort to link the Vote Different video to the Obama campaign, it’s pretty clear that it was produced by a lone filmmaker, acting independently of the campaign.

The thought that individuals now have the same access to media production and distribution that was previously reserved for only the most well-funded candidates has to scare the party machines like nothing they’ve ever seen. The old-line partisan hacks must be shaking in their boots — assuming they even realize what’s about to happen.

In this first general election cycle of the YouTube era, voters are likely to use those tools to support candidates of the two major parties. It’s only a matter of time before voters realize they can use those same tools to support any candidate — and then we may start seeing real change.

I doubt the two-party system is ready for the long tail of politics.

Over the next 18 months, we will undoubtedly witness all sorts of exciting campaign activities taking place across the social web. As Psaki indicated, the candidates will continue to take a hands-off approach to social media. But at some point, the campaigns will decide that any given platform is too important to leave in the hands of political amateurs. And that’s exactly what happened last week when the Obama campaign finally took control of the Barack Obama user profile on MySpace.

While it seems obvious that the Obama campaign should have control over the Barack Obama profile on MySpace, gaining control of that profile resulted in rare negative publicity for the campaign.

Obama’s MySpace page was initially launched back in 2004 by Joe Anthony, an ad hoc Obama Supporter. Anthony’s efforts were a classic example of voter-generated content. Obama had not yet declared his candidacy, but an excited supporter took the opportunity to set up a public profile for the campaign anyway. Over three years, Anothony watched the profile attract more than 100,000 friends.

And that’s when the trouble began. The Obama campaign began to see MySpace as a strategic tool for reaching younger voters. They were uncomfortable leaving the profile under the control of a volunteer who had no real affiliation with the candidate. While the campaign tried to recruit Anthony, the terms offered didn’t meet his long-term career objectives. The negotiations ended badly, and Anthony ultimately lost control of the page he’d spent months building.

As Anthony told the Chicago Sun-Times:

“I have no background in politics other than this page,” he said. He simply wanted to change the world.

Every campaign should look for enthusiasm for the candidate combined with enough knowledge of new media to generate critical momentum. The problem is that the same voters who are so enthusiastic in the beginning are not always the ones who see the project through to completion, as Joe Anthony discovered.

We might see similar struggles in Second Life if the virtual world doesn’t implode before reaching critical mass. For the time being, the real-world campaigns don’t think Second Life is important enough to join the big leagues — although I expect we’ll see at least one of the top-tier candidates provide some form of approval. If for no other reason so they can issue the obligatory “First In Second Life” press release.

Curiously, the Barack Obama Second Life headquarters disappeared several weeks ago. The building vanished overnight, replaced by signs indicating the headquarters would be moving to a new location. That was weeks ago, and there’s still no sign of the new HQ.

Is the disappearance of the Obama HQ somehow linked with the struggle to gain control over Obama’s MySpace page?

For the record, the Obama building isn’t the first Second Life campaign HQ to vanish. The original Hillary Clinton headquarters disappeared in early April. It’s still not clear whether the deletion was the intentional work of a disgruntled volunteer or the result of a technical glitch. It’s surprisingly easy to set the Second Life land permissions in a way that causes anything built on a piece of land to be returned to the owner (and removed from the land).

If land permissions are to blame for the Clinton incident, we’re starting to see a trend. Proper land settings would have prevented the defacement of the Edwards campaign headquarters. These examples are more reasons why candidates who are serious about campaigning in Second Life will ultimately want to employ professionals to build and manage their virtual campaigns.

In the meantime, these Second Life campaigns are more like virtual fan clubs than conventional political machines.

Over the next few weeks, I plan on taking a closer look at these fan clubs, and I’ll have the full report here on Medialoper — provided I have adequate funds to complete my assignment. Unfortunately, as I mentioned last time, I spent my initial advance on a flying submarine (now deceased). As a result, I’m flat broke, and if Lopy doesn’t wire more money soon, it looks like I’ll have to take up camping to earn a few extra Linden. As luck would have it, the nearest campsite is the Wiccan nudist beach.

Update: 5/16/07 — Two links were removed from this post. The first was a link to another blogger’s report on the disappearance of the Obama campaign headquarters. I initially linked to that post because it corroborated my experience of teleporting to the location, only to find that the building was no longer there. The second link was to a post with background information describing the deletion of the original Clinton campaign HQ. I had hoped to talk to the blogger in question before posting my story to get more information on the occurrence but was unable to. The paragraph regarding the deletion of the Clinton HQ was in no way intended to cast doubt on the accuracy of that blogger’s reporting.