When we built the Medialoper Review Labs, we had great hopes that our first major product review would be something special, like a sneak peak of a 6th generation iPod or maybe a preview of an Origami UMPC.

Neither Apple nor Microsoft responded to any of the emails we’ve sent requesting review units. Instead, the subject of our first review is the latest digital audio player from the little known DuroSport Electronics Company. You’ve probably never heard of DuroSport – we certainly hadn’t. The company contacted us earlier this year to offer us an exclusive review of their newest mp3 player.

At first, we weren’t interested in reviewing a generic media player from an unknown company—that was before the company’s persistent marketing rep dropped hints that the player in question would be licensed to a well-known Internet company as the audio player associated with a new online music service to be launched later this year. The only thing we know is that the “well-known” company’s name “begins with an A and ends with .com”. Whether this is a legitimate claim or a desperate attempt to obtain media coverage for yet another mp3 player, we were intrigued enough to evaluate the new Prism DuroSport 6000.

Regardless of whether or not the new Prism DuroSport is part of a new online music store launch, we’re certain DuroSport will be a household name in no time – but not necessarily for the right reasons. 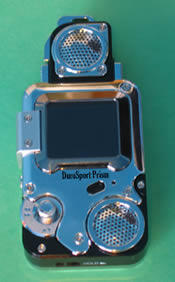 Let’s put it this way, if the RIAA had designed an industry approved digital media player, this is what it would look like. The DuroSport website boasts that their proprietary DRM system (dt6) was submitted to the RIAA’s SDMI working group for consideration as an industry standard—they remain hopeful, though the SDMI working group has been on hiatus for five years.

DuroSport’s marketing material calls this a digital audio player unlike any other, and they’re right. We’ve certainly never seen anything like this.

On paper, the Prism DuroSport 6000 doesn’t look so bad:

At first glance, it’s an impressive (and somewhat eccentric) collection of features. While we had never heard about disposable flash memory, it’s hard to argue with 48-hour battery life and iTunes Music Store compatibility. We were eager to get our hands on a test unit.

Unfortunately, our excitement turned to disgust once we started using the Prism DuroSport 6000. This shoddily assembled (1/2 star) product is the worst-looking, ugliest-sounding, hardest-to-operate device that any of us can ever remember. It’s easily the worst high-tech product since Microsoft Bob.

Right now, you’re probably thinking: it can’t be that bad, can it? Read the results of our field test and see for yourself.

DuroSport claims the Prism 6000 combines “durable construction and elegant design”. Our most family-friendly description is: Doctor Frankenstein’s mp3 player. This monstrous “portable” weighs in at nearly five pounds and barely qualifies as a handheld. While it supposedly fits in most backpacks, we were unable to squeeze it into anything smaller than a weekend bag.

The oddly positioned external speakers eliminate the possibility of any meaningful sound separation. Not that that matters because, according to the DuroSport website, the company’s engineers believe stereo is illusory. Yes, you read that right. DuroSport doesn’t believe in stereo. They also believe the Earth is flat and that dinosaurs hung out with cavemen. Also, caveman always ran around in bearskin pants.

The toggle controller is major design flaw that we’ll address in the playback section of this review. While DuroSport believes it’s a major improvement over Apple’s scroll wheel, we found it to be almost completely useless for accessing the DuroSport’s unique features.

The quick start guide advised us to install the special DuroSport Music Manager software and device drivers before we began charging the player. Odd, since the player’s charger is not connected to the PC in any way. Because our testing policy is to follow instructions to the letter, we complied.

After installing the provided software, the DuroSport Install program insisted that we reboot our computer twice in succession. After the second reboot, two dozen new icons appeared on our Windows desktop (we counted), including one that offered 120 free hours of something called BOL (Bosnia Online). The dial-up number was, naturally, a long-distance call from anywhere on the planet.

After uninstalling these unnecessary applications, we started transferring music to the Prism DuroSport 6000. That’s when we learned about the DuroSport’s unique battery technology.

Prior to first use, the Prism Durosport must be charged for 48 continuous hours. Not 47 hours, and definitely not 49 hours. We calculated optimal charging time at 48.14 hours. Gods help you if a power surge—or worse, blackout—hits. Over- or under-charging the DuroSport battery voids the warranty. One tip: send the extended warranty application before you begin charging. If the form is received by DuroSport headquarters before the battery dies, you may be eligible for free replacement (shipping and handling costs will be charged).

Thankfully, the MLR Labs are brand new. Once we unplugged essential laptops, lamps, and climate-control equipment, we had sufficient outlet space to accommodate the Durosport AC adapter. The Durosport manual explains that the extreme size of the AC adapter was necessary to get “extra jiuce” (their spelling) needed by their revolutionary new Deutrium-Tritrium battery. The manual also said that after several charges, we should consider ordering a “Charger for the Battery Charger (Battery-Operated)” via their website.

So what is a Deutrium-Tritrium battery? The website and manual were somewhat cagey on this issue—suggesting it was based upon technology previously available only to the world’s top scientists. Naturally, we Googled it. We were about two feet away from nuclear fusion! A MLR Lab scientist powered up the company Geiger Counter (for the first time ever) and declared the battery to be “slightly—but only slightly—radioactive.” We believe this explains the half-life conundrum.

We asked DuroSport about the battery half-life, and they claimed it was a feature. The DuroSport marketing representative told us, “By definition a battery like that can never die. Since it will always have half as much power as the previous charge, it will never reach zero”.

After our charging/decontamination process, we transferred music to the player. Since we have a large collection of (legal) mp3 files, we selected several hundred files for playback testing. The DuroSport music manager immediately informed us that mp3 was not a supported format (contradicting documentation and the website). We called tech support, and after spending nearly two hours on hold, were informed that we needed a firmware upgrade to play mp3 files. Since we weren’t eager to install any more software we opted to let the DuroSport Music Manager convert our music files to the dt6 secure music format.

The process is time-consuming (do not expect to use your DuroSport 6000 within the first week of ownership), and the end results were not what we expected—our files, including those not included in the test group, were converted to the dt6 format. Our MP3 files were gone. We looked for vain for a program to convert our files back, but not even the cruftiest hacker would bother writing for this format. We now have a large collection of music files that will only play on a DuroSport brand media player.

We should also note that the player takes forever to boot—as in Windows 95 forever. DuroSport refers to this as the “warm-up process”, and they’ve programmed the display to spelled out “Warming Up” while you’re waiting. Even worse, they spell it out one letter at a time: W . . . A . . . R . . . M, (etc). By the time both words are spelled out, it’s supposed to be warm—but it usually isn’t.

After waiting for what seemed like days for the player to warm-up, we were finally ready to experience the wonders of the DuroSport. Here are some of the “features” we encountered during our playback testing:

Strangely, we found that the “Do you really want to?” message came up for almost every operation, including simple volume changes. The volume range of the player is also worth noting—it goes from 1 to 256, so to get any significant change in the volume you have to go from 34 to 78 for example, and after every single number the player displays the ubiquitous “Do you really want to?” message.

We would like to point out useful features of the DuroSport 6000, but, well, there aren’t any. We’d also like to give DuroSport the benefit of the doubt and consider the possibility that this is just one bad product, but after looking around the internet it appears that DuroSport has a history of releasing bad products.

We cannot stress how disappointed we were with the Prism DuroSport 6000. Between the impossible set-up, laughable “features”, and the nearly unusable user interface, the Medialoper Review Labs cannot imagine having a worse experience with any product, ever. It’s the Plan 9 From Outer Space of music players. And given the suggested retail price of $299, we are very worried that some people will confuse it with an actual high-end digital audio player.

All we can say is this: in the name of whatever is sacred and holy to you, do not purchase this product. If you do, you will most certainly regret it. Today, tomorrow, and for the rest of your life.

Note: It is the policy of Medialoper Review Labs to return review units to the manufacturer after we have completed our evaluation. We couldn’t get rid of the thing fast enough.