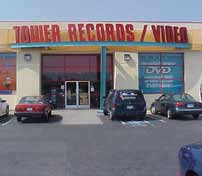 As the ‘Loper who is most in touch with the 15-year-old inside, I had a long conversation with that 15-year-old, and he is a little bit sad about the news that Tower Records is finally dead.

Because when I was a teenager — and for maybe a dozen years after that — the Tower Records in Fresno, California was the greatest place in the entire fracking multiverse, bar none.

So while I don’t go there that often anymore — though, ironically, the last time was about two days prior to the liquidation announcement when I discovered that Best Buy didn’t have the CD of The Hold Steady’s Boys and Girls in America and I needed to have it right that second — I am going to miss it as an easily-accessible choice between the indie-deficient big box stores and the hard-to-get-to stores like Amoeba.

However, there are some memories that this music geek has about the only major record chain store that even seemed remotely hip:

Tower Records was an essential part of a time and a place that are long gone now. It was a perfect place for a post-Boomer pre-Internet rock ‘n’ roller who didn’t live in the big city to discover music. So while I’m not sad that they’re going away, I’m sure as shit glad that they existed.