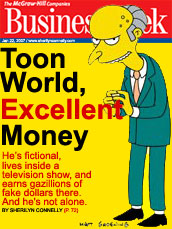 Which brings us to Anshe Chung, the Second Life persona of one Ailin Graef.


Though she wasn’t exactly unheard of before, Anshe Chung’s media presence skyrocketed last year thanks to her press release which christened her the First Virtual World Millionaire—that is, the first gamer to make over a million meatspace bucks (MS$1M) from profits made inside a game, in this case Second Life. (The first millionaire from Hello Kitty’s Island Adventure has yet to emerge.)

Prior to that, her avatar famously graced the May 1, 2006 cover of Business Week, presumably the only noncorporeal character to do so. (Unless they ever did a cover story on Mr. Burns, and I would so love to believe they did.) Her aesthetically pleasing appearance has surely accounted for a lot of the press coverage, before and after the millionaire hoopla.

She’s also prominently featured on the main page of Anshe Chung Studios, if garbed more demurely than the fetching mutliclasped cheongsam she wore for Business Week. (Except that she didn’t “wear” a damn thing, and there wasn’t a photo shoot. o brave new world, that has such grammatical conundrums in’t!) Though the point of the site is ostensibly Second Life real estate, it doesn’t miss the chance to remind potential customers of their eponymous, cute-as-a-button and sweatshop worker-admiring pixelvixen. Branding, kids. In meatspace and inside the Linden Lab servers, it’s all about branding. If you’re going to buy or sell Furry real estate, why not get it from a sexy media darling?

Which is all fine and good. She’s a celebrity and she works it, selling her attractive visage as much as anything else. She didn’t get the quasi-coveted title of Avatar of the Year, Second Place just because of her business acumen; her ability to script, or at least afford, hot red-and-black bustiers helped a little. And I get that. I perform a lot, reading my work and hosting shows, and for certain gigs I give as much if not more thought to what I’m going to wear than what I’m going to say. The awareness of the vanity does ultimately make me work all that much harder on the actual words, to make sure the audience knows there’s a brain behind the pretty face. By the same token, it’s obvious Ailin Graef has worked hard to get where she is, both in terms of wealth and celebrity status.

As we all know from watching VH-1, however, fame and fortune come with a price. What happens when Graef is Griefed? And who emerges from the shadows?