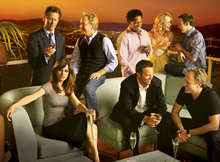 From the beginning of this TV season, Rox had planned to write a review of Studio 60 on The Sunset Strip. See, she went into it as a pretty big fan of Aaron Sorkin’s TV shows. She loved Sports Night, and I would guess that the Sorkin years of The West Wing would make her short list of favorite shows ever. So she was really looking forward to it.

But I don’t think that she could ever figure out what to say about Studio 60. Every single week, we watched, waiting for what shoulda been an unbeatable combination of premise, writers and actors to coalesce into the great show we pictured in our heads. Instead, the best that we could consistently come up with was that Matthew Perry was awesome (because he — and yeah, OK, Steven Weber — has been the one great thing on this show), and after that . . . bupkis.

So, unlike a lot of people who are writing Studio 60 obits right now, I came in liking both of Sorkin’s previous shows — even if I would occasionally yell “stop beating me around the head with my own beliefs!!” at them — and really wanting it to succeed.

Well, after tonight’s episode, it’s going on hiatus — quite possibly forever — in favor of a show about those crazy Irish-Americans mobsters with the wrong consonant in their last name and I have some thoughts about what happened. While I still haven’t figured out exactly what went wrong, I can pinpoint a moment that epitomizes the difference between kind of the show that Studio 60 should have been and the show that it ended up being.

It was a scene near the middle of the episode called The Friday Night Massacre, which juxtaposed how Matt Albie (the head writer played by Matthew Perry) was dealing with his latest break-up with Harriet Hayes with scenes of how they met not-so-cute wayyyyy back in 1999. (When I found out much of this episode was set in 1999, I thought — meanly, I confess — “cool, back when Sorkin could still write!”)

As the episode opens, we are in the middle of the rehearsal for the musical guest: a busty brunette belting badly tasteful pop. We didn’t know who she was. That’s not necessarily surprising. After all, it’s not like Aaron Sorkin exactly shared our musical tastes — we didn’t know who Corrine Bailey Rae was, either — as underscored by the episode that had 47 hours of the whole world stopping to watch fracking Sting play that fracking lute. Or the White Stripes jokes while Jack White was very publicly with the Racontuers. Though, to Sting’s credit (a phrase that I thought I never thought I would ever write), I think that the whole lute thing horrified even him so much he reformed The Police.

In any event, we very soon found out that the busty brunette singer’s name was Diana Valdes — and, since we watch TV with one hand on the TiVo remote and the other on the laptop, we googled her, and were very very confused to find out that no such singer existed. But . . . OK, I guess. At first, it didn’t make any sense that they couldn’t get a real musical guest for this episode. Though it was funny that the fictional musician’s music was in step all of the very tasteful factual musicians that they had previously featured as guests. Was she a real unknown musician whom Sorkin thought was great? Or was banging?

As it turns it, she was an actress playing a musician. In a show that had established that it featured actual, real musicians. Furthermore, the reason for the fiction soon became clear during a scene where the singer recognizes that the suddenly pill-popping Matt Albie is high and offers him some more drugs: they either couldn’t — or wouldn’t –get a real musician for the part. Either none of the musicians that Sorkin would consider worthy of his show would send themselves up, or he couldn’t imagine one of these musicians doing such a terrible, terrible thing as to nudge-nudge, wink-wink about drug use.

Either way, it’s pretty damming, especially when you contrast that with Extras, where real-life actors and musicians play hilariously awful caricatures of themselves. D’ya think that Chris Martin — seen flogging a (fictional?) Coldplay’s greatest hits on Andy Millman’s talk show — wouldn’t have thought it just fine to offer Andy & Darren a toot if Gervais & Merchant had written it that way? Hell, Daniel Radcliffe would have stripped for them instead of onstage, had they asked him.

But, for some reason, Studio 60 on the Sunset Strip couldn’t have that same level of realism. Or consistency: had they not consistently shown us musical guests who were real and famous, having an actress playing an unknown singer would have been just fine. But they did, so it wasn’t. And, to me, that willingness to indicative of everything that went wrong with it.