For over 20 years now, Carol van Dijk and her compatriots in Bettie Serveert have been releasing slightly askew, Velvet Underground (formally) and Neil Young (literally) influenced albums, some of them pretty great, some of them not. My favorite is probably 2003’s Log 22, which features some great psychedelicized jams, but it was their early-to-mid 90s records that made what little splash they ever made.

And if that splash hit you, it was probably made by this song, “Tom Boy,” one of the most delightfully low-key anthems of the 1990s. Like most of Bettie Serveert’s songs, “Tom Boy” unfolds at its own pace, pretty much sneaking in and out if its chorus:

You call me a tom boy
And I love it
Because only a tom boy could stand above it
And simply change it.

Not to mention what feels like a feminist “fuck you, I will let your insults pass right through me” underdog attitude that goes along perfectly with big guitar chords and quiet interludes that dominate “Tom Boy.” 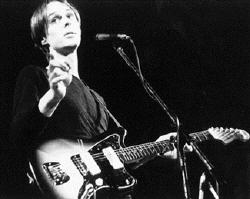