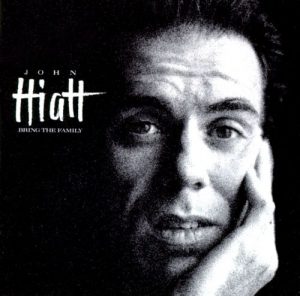 John Hiatt was a hoary veteran by the time he broke into the charts for the first time with Bring The Family, his eighth album.

And part of the reason he broke into the charts was that the advance word was that he’d been able to recruit a crack band featuring Jim Keltner on drums, Ry Cooder on guitar and Nick Lowe on bass to play a tough but sparse set of rootsy songs.