An improbable mix of gospel, soul and folk-rock, and featuring a vocal round-robin that both Sly Stone and Kanye West spent their entire careers trying to recreate in ways both natural and artificial, “Can You Get To That” is a departure from the normal Funkadelic sound that stands as one of the greatest songs of the 1970s.

I first heard it in the mid-1980s on a Funkadelic compilation called Best of The Early Years, Vol 1 that I snagged from the Music Library at Fresno State.

END_OF_DOCUMENT_TOKEN_TO_BE_REPLACED

It starts with the sound of a broken speaker fuzzing out and a no doubt tripping George Clinton seriously “Mother Earth has become pregnant for the third time, for y’all have knocked her up,” and shortly after that, a slow guitar vamp in one speaker, like you’d hear at the beginning of a slow torch ballad.

Then Eddie Hazel gets to work in the other speaker.

END_OF_DOCUMENT_TOKEN_TO_BE_REPLACED 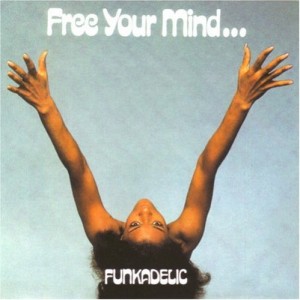 So apparently, George Clinton has admitted/bragged that Free Your Mind … And Your Ass Will Follow was cut while the band was tripping on acid.

And yeah, even on the single “Funky Dollar Bill”, you can feel the LSD-25 dripping from every single echoed guitar riff, every single wah-wah workout, every single discordant piano note. They clearly had access to the good stuff.